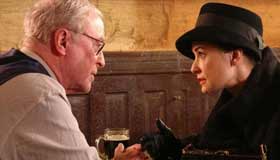 Despite a finale that fails to live up to the promise of its premise, Flawless still manages to be a polished throwback to the great British crime thrillers of the ’60s, and a welcome return to form for director Michael Radford. And though it doesn’t really stand up to any of its prestigious forebears, there’s enough flash around the edges to make it one of the season’s more pleasant surprises for both indie film buffs and mainstream audiences
alike.

The story concerns an American expatriate named Laura Quinn (Demi Moore, sporting a very impressive American/English fusion accent) whose aspirations to become the first woman to attain an upper-executive position with the London Diamond Corporation are squashed when it becomes clear that the glass ceiling, even in the progressive ’60s, is still very much intact. That’s when the corporation’s mild-mannered janitor, Mr. Hobbs (Michael Caine), makes her an unlikely proposition—take revenge on her oppressors by teaming with him and heisting a healthy haul of raw stones. Initially reluctant, subsequent setbacks finally push Quinn to accede to the janitor’s seemingly nutty plot, and the wheels are soon in motion for what should be a fairly routine heist. But all is not as it seems (is it ever?) and Quinn soon finds herself in the eye of a storm that could very well help topple the British government.

Since earning an Oscar nomination for Il Postino in 1994, the eclectically-inclined Radford has largely meandered, veering from the ill-fated and oft-delayed B. Monkey to the experimental Dancing at the Blue Iguana to the ambitious but flawed The Merchant of Venice. Here, however, he seems to have found a groove, seductively recreating the period with exceptional detail and clearly enjoying the interplay between his two very capable stars. Caine, as always, is brilliantly effortless, while Moore seems to relish the chance to finally play a real character again. This is arguably her best part since Ghost, an opportunity she seizes on to deliver one of her best-ever screen performances. That it’s a character part and not an obvious star vehicle makes for a more multifaceted (no pun intended) effort than what audiences may be accustomed to seeing from the notoriously choosy Moore.

Fine supporting turns from Joss Ackland and Lambert Wilson keep the proceedings glossy and professional even though Edward Anderson’s screenplay eventually starts to run out of steam. As is so often the case in caper and heist films, the setup creates expectations that turn out to be terribly difficult to pay off, so audiences ought to be alert to the eventual letdown. Whatever its shortcomings, however, Flawless is too textured and too well made to be easily dismissed. As with a good diamond, it’s the cut, not the flaws, that impresses the most.