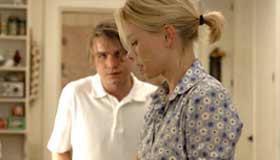 A remake of Michael Haneke’s 1997 film of the same name, Funny Games follows an affluent family (Naomi Watts, Tim Roth and Devon Gearhart) to their summer home on vacation. Once there, the family is terrorized by an effeminate duo of serial killers. Masterfully made film “finds its home” with an American audience, but as it features a similar amount of “unpleasure” as the original, it might find a chilly reception stateside, and certainly won’t stray too far outside of the arthouse bubble.

Haneke’s films always indict violence in the media, but Funny Games, as opposed to, say, Cache or Code Unknown, is more demonstrably self-aware in its message. The original, as well as its remake, is specifically interested in violence played for entertainment’s sake. On the one hand, the result of this critique is a film of considerable suspense, so much so that the tension lasts well beyond its welcome. On the other hand, Haneke is too subtle a filmmaker to ignore the reality that the film’s purpose is somewhat self-fulfilling.

Paul (Michael Pitt) and Peter (Brady Corbet) come over to Ann (Watts) and George’s (Roth) under the auspice of borrowing eggs for a neighbor. Though ominous, the two are phenomenally well spoken and polite, and appear in shining white with white gloves because they “love golf.” Once inside they use shockingly little violence to keep the family in check but make no bones about their plans. Performances are stellar. Haneke features a number of gruelingly long takes with actors entering and leaving frame. As if inciting our imagination (or taking the moral high road?) Haneke never shows the site of violence, instead meditating on its unfortunate outcome. We see bloodied pant legs but no blows, dead bodies but no gunshots. For one moment, we see a man shot, but hostage-taker Paul finds the remote and rewinds the sequence, rewriting it on the second take. His character’s alienating sense of calm perhaps comes from this position of power, which he shares with no one, not even his serial killing pal Peter.

When seeking the remains of her dead dog, Paul asserts his power over Ann by playing “hot/cold.” This is the first of a handful of direct addresses that put the audience in cahoots with the killer. At many moments, it’s very surprising that tricks from old-hat European cinema are as effective as they are in a film that’s so deliberately made for an American audience.

As a film about media, Funny Games is swimming in references to horror films. The killers are right out of Rope. They’re Leopold-and-Loeb-style bluebloods, epicene, well mannered and (though it may be a lie) “jaded by the emptiness of existence.” In an homage to Psycho, Peter stands in the doorway holding a strategically placed golf club. Reminiscent of Halloween, Ann goes running from summer mansion to summer mansion screaming for help but no one comes. My favorite film reference had to be the use of headlights on the tree-lined road, which called back to George Sluizar’s The Vanishing, a European suspense film also remade for an American audience by its original director.

The hostages ask “Why?” again and again but are repeatedly answered with lies or jokes, suggesting that the purpose for all the terror and tragedy is blind chance (a pretty common rationale for criminals in films these days). Paul says, “The wind blows where it wants to, that’s why sailing is fun.” Yet at the end of this mystery within a mystery, Paul and Peter are chatting about what sounds like a script. “So the hero’s family is in reality and the hero is in a fiction  but a movie is just as real as reality because you can see it.” As hard to defend as that concept might be, Haneke is certainly successful in putting out the idea that this film, made as it is of previously successful horror films, is a strange kind of reality in and of itself.