close
… And roll at a music day camp for young ladies 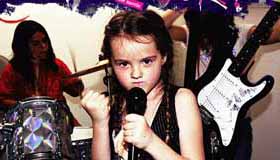 A documentary about a week long rock ’n’ roll day camp for girls 8 to 18, Girls Rock! captures a good deal more than the sometimes discordant music produced by these young, would-be chick-monsters of rock. What the film is really about is how these young ladies find their voices (even their unladylike voices) in a setting designed to allow them to “take up space” and make noise in ways that girls are often passively, if not directly, dissuaded from. The camp is run by a cadre of slightly older female rockers who cut their teeth during the female rock revolution of the ’90s when the likes of Alanis Morissette, Meredith Brooks, Lisa Loeb, Queen Latifah (admittedly, not technically rock) and others found a new acceptance in the annals of rock history.

The film follows a young Korean-American lover of death metal who begins the camp with identity issues, both physical and emotional; a quirky 8-year-old with communication issues; and an 18-year-old who has spent most of her life in foster homes and juvenile detention camps. By the end of the rock ’n’ roll camp, each of these young women (with their impromptu bands) has written songs and learned to play instruments well enough to perform them in a concert where the refrain Girls Rock! can be taken figuratively and literally.