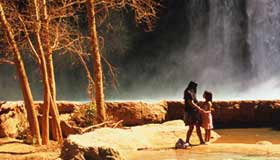 If you don’t mind wearing those 3D glasses and being lectured at by friendly, outdoorsy types, this IMAX trip down the Colorado River is worth taking. The scenery isn’t mind-blowing or the filmmaking awesome, but there’s a certain majesty in how the movie achieves its noble goal of raising awareness about the world water crisis.

Narrated by Robert Redford, produced and directed by Academy Award winner Greg MacGillivray, and featuring environmental activist Robert F. Kennedy Jr., the well-pedigreed advocacy project might do the planet some good—provided those who see it resist the urge to rush out into the wilderness, which will only cause further damage.

After a cutesy title sequence set to a tune by the Dave Matthews Band, Grand Canyon Adventure sounds the alarm about the Earth running out of freshwater. The statistics and visual evidence marshaled during this preamble are thoroughly convincing and the river that created one of North America’s natural wonders is a case in point. Described by Kennedy as having been reduced to “basically a plumbing conduit between the two largest dams in America,” the mighty Colorado no longer flows to the sea thanks to localized drought, global climate change and, most of all, thirsty development of the West (which led to the damming). The river and everything that relies on it has been drastically changed in the 40 years since the 12-year-old Kennedy visited with his parents and siblings. The movie is built around the trip he took in the summer of 2006 with his daughter Kick, anthropologist/writer/explorer Wade Davis, his daughter Tara and Shana Watahomigie, a member of the Havasupai Tribe and a local guide and park ranger. Film crew and various others in tow, they rode the 240-mile section of the Colorado that snakes through Grand Canyon National Park.

Davis’ reflections form the movie’s other through line. When, in voiceover, he observes, “you’re so connected to this river, it’s like you’re a part of it,” “we may have changed the shape of the Colorado, but not its ability to shape us” or “we can heal the Colorado if we have the will,” it seems a shame the river and the scenery can’t speak for themselves. They can say certain things, of course, but evidently not enough to justify the movie’s $8-million budget. Director MacGillivray is an old hand at these giant-format films and knows how to give everything its due, balancing pretty pictures, science, personal histories and the need to entertain and excite (fulfilled by the group shooting the whitewater rapids) reasonably well.

One thing he goes overboard on is shots of people frolicking in the water as if at a theme park, a sensation enforced by the twangy jamboree music. Yet this fits in to a familiar rhetorical tack—the envy argument. In addition to fretting about what we’re depriving future generations of and stoking guilt about what we’ve done to the ancestral lands of Native Americans and the spirits residing therein, a typical form of persuasion in this context is to say: “Look how much fun they’re having on the river. Shouldn’t everyone be able to enjoy it?” It’s a tad insincere and condescending when the filmmakers know it would be bad for the river if everyone had such access and took advantage of it, and when they are criticizing democratic, if obscenely wasteful, practices such as flood irrigation and the overdevelopment in mushrooming desert communities like Las Vegas, the outright villain of the piece. Otherwise, the movie avoids a tone of environmental snobbery and doesn’t feel like a travelogue for those less-fortunate souls who will never see the Grand Canyon in person. It concludes on a hopeful note by offering small practical suggestions and an upbeat, egalitarian plea for everyone watching to get personally involved in water conservation.

Of the movie’s two corporate sponsors, TEVA and Kohler, the outdoor-gear maker seems a more harmonious fit than the bath fixture giant, although increasing either’s bottom line couldn’t be a net good for the environment, no matter how many natural-fiber garments and low-flow faucets they sell. Which leads to the first question that arises when encountering a project like this: How big was the movie’s environmental footprint and was the damage outweighed by raising awareness? Assuming everything possible was done to minimize the shoot’s toll on the environment, the answer to the second part of the question is yes. Still, I wonder whether the 50 pages of press notes—only a small part of the elaborate promotional package—were printed recycled paper.