close
Underdeveloped doc is not one for the ages 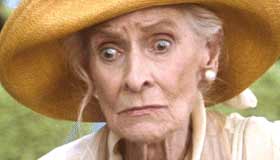 A nonagenarian actress proves a difficult, if fascinating, subject to keep pace with in Jyll Johnstone’s underdeveloped documentary. While Mimi Weddell’s determination and spark have appeal beyond a drama-queen niche, the flick faces an uphill battle getting traction with audiences.

Be-hatted, be-gloved and impeccably groomed, 93-year-old Manhattan actress and model Mimi Weddell parades down the street full steam towards her next audition. As her appearance proves, Mimi does nothing halfway; in gymnastics class, she flips around the parallel bars with grace before dismounting and somersaulting across the room. She’s what your grandmother would call “a character,” except Mimi could give a fig about other older women, particularly the other actressy ones who keep her from cornering the market on parts for grande dames. (She’s also frequently cast as a murderer.)

Still, a documentary requires more than one knockout character, and while filmmaker Jyll Johnstone—like Mimi—specializes in old ladies (to date, her youngest subject is 87), she doesn’t manage to shape her time with Mimi into anything more than a series of underplayed moments. At one point, scenes after Mimi lands in Florence, Italy, for a dream vacation, Johnstone clues us in that Mimi intends to go there to die. Minutes later, she’s back in Central Park without any sense of dramatics—the most egregious sin in Mimi’s world, where she regularly dismisses her two children as “earthbound.” Before shooting her first B-movie, Dracula’s Last Rites, at 75, in which she played a vampiric mother-in-law, Mimi was a secretary, wife and struggling theatre actress who lived hand-to-mouth with her unemployed musician husband. He died just before the film started production—without leaving health insurance. “I’m sure she ate carrots for three months,” says her daughter Sarah. Why didn’t she help her mother out? A good (and unasked) question. Johnstone isn’t slipshod enough not to pick up on the tension between Mimi, Sarah and son Tommy (not to mention the time Mimi grimaced at her 6-year-old granddaughter for saying the theatre was boring). The threads of resentment are offered freely by Sarah, who cops to feeling too “schlumpy” for the dignity of her mother, who forced her children into a series of society balls as an excuse to dress up and flaunt her Mayflower pedigree. But these are confessions without insight. When Sarah asks her mom if giving birth to her held back her ambition, Mimi shrugs cavalierly and says, “I always knew I’d rise above it.” It’s a strong moment, but the emotion dissipates.

Overall, Hats Off feels like a scripted documentary that avoids the full story. It’s as if Johnstone’s preconceived ideas about Mimi—that she’s a broke spitfire—precluded investigation. How is she broke when she’s shot commercials for Nike, cameoed in Hitch, posed on the cover of New York Magazine, and guest starred on Sex in the City ? The probable answers, like her thrice-weekly hair salon appointment at Elizabeth Arden, don’t match the film’s view of her as a starving artist and get tossed. When does the price of vanity preclude the benefits of fame? The answer is too complex for Johnstone’s simplistic huzzahs.