close
Detector will find an appeal beyond French film aficionados 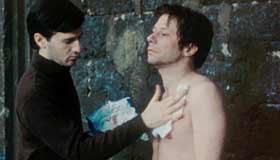 In Heartbeat Detector, a rising executive discovers that his multinational employer has sinister links to Germany’s past. Director Nicolas Klotz combines an intriguing story with a distinctive ambiance that will appeal to an audience beyond French film aficionados.

Simon Kessler (Mathieu Amalric, The Diving Bell and the Butterfly ) is employed in the Paris office of a multinational petrochemical corporation SC Farb. For seven years, he has been responsible for the selection of new employees and for improving productivity with motivational seminars.

Impressed with Simon’s participation in a recent downsizing, the corporation’s managing director Karl Rose (an imposing Jean-Pierre Kalfon), selects him for an important confidential assignment. Rose has received disturbing reports from the head office in Germany that the firm’s CEO Mathias Just (Michael Lonsdale) has been behaving erratically. Simon travels to Germany to find the extent of any damaging behavior by Just. Simon discovers that Just had played violin in The Farb Quartet that had included his secretary Louisa (Laeticia Spigarelli). As a cover for his investigation and to get to know Just, Simon attempts to start a company orchestra as a morale booster and suggests that Just participate. Simon also becomes attracted to Louisa.

The muted colors of the corporate offices are reflected in the employees’ suits, which have become their uniforms. As a release from the pressures and rivalries of the corporate workday, Simon and fellow workers spend evenings attending raves and other hard-drinking events, releasing emotional and physical tension. There are several striking scenes including shots of drunken carousers passed out on the street.

Director Klotz maintains a continual tension and dread as Simon begins to uncover damaging information. Moody lighting adds to the ominous tone. Klotz, successful in his desire to “film Simon’s experience like an almost hallucinogenic experience,” has said that he was shaken by the novel La Question Humaine by Francois Emmanuel on which the screenplay by Elisabeth Perceval was based. Klotz has also said that Heartbeat Detector, along with his earlier films The Wound ( La Blessure ) and Paria, is part of a trilogy called Modern Times.

Just plays along with Simon but becomes more distressed as he reveals details about Farb stretching back to the Nazi era. Another former member of The Farb Quartet (Lou Castel) holds crucial information about how the Third Reich laid the foundation for the dehumanizing behavior of the German multinational, a place where words have become twisted and emptied of meaning. In another notable performance, Amalric, who will appear in the next James Bond film, shows Simon’s cool assurance becoming shattered as everything comes into question. He is well matched by Lonsdale’s increasing desperation as Just—a role that earned him a Cesar nomination for Best Supporting Actor.