close
In hard times, Faithfull must fall back on soft hands 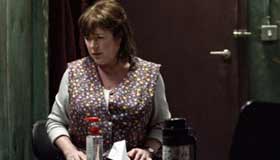 Although horrified by this repulsive endeavor, it’s the only way to fund a trip to Australia for experimental surgery to save her little grandson Olly (Corey Burke) from an unspecified lethal disease. His squabbling parents (Kevin Bishop and Siobhan Hewlett) don’t have the means. Meanwhile, Maggie’s wily boss Miki (Miki Manojlovic) admires her levelheaded gumption. A grim scenario is poised for an oddly uplifting resolution.