close
Paul makes the trip from the Web to theatres 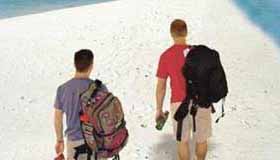 Turns out the ‘Net was not the Last Stop for Paul, after all. The Webby Award-nominated series of shorts is set to explore uncharted territory when writer/director/producer/star Neil Mandt’s tale of two globetrotting buddies spreading the ashes of the dearly departed Paul starts its theatrical release in Los Angeles on March 7. While word of mouth on the festival fave—winner of top awards at more than 25 fests—may inspire a modicum of moviegoers to buy tickets, pic’s Stop in theatres will likely be but a brief layover on its ultimate trip to DVD.

Halfway across the South China Sea from the Thai mainland, the boatman Charlie has hired to take him to the island of Koh Phangan for its infamous Full Moon Party cuts the outboard and drops anchor. Perched on the prow, he brandishes a blade.

The boatman lights a cigarette, then launches into a barely decipherable diatribe—punctuating his broken English by slashing the air.

It’s a standout scene—with Charlie, a vacationing bathroom-supply salesman, desperately trying to use his quick wit to defuse a tense situation—but even more so after realizing that the man who plays him, Mandt, had to teach his co-star the lines phonetically in-between takes.

Non-pro performances were the norm during the production of Last Stop for Paul, which was shot in about a month by multi-hyphenate Mandt and his cinematographer/co-star Marc Carter. Structured as a series of humorous tales told by globetrotting travelers, Last Stop for Paul is organically connected by a thematic through line—two buddies spreading the ashes of a friend who died before he could take a long-planned around-the-world trip.

Mandt’s amiable narration also serves to tie together tales as diverse as being sultrily tied to the frame of a motel-room bed—and then summarily robbed—by a pair of Jamaican hotties and careening down the side of a Chilean mountain in a van with no brakes and a duo of hard-partying Irish lads at the wheel.

“You know what they say,” he deadpans, “one day, you’re selling toilet seat covers, and three days later, you’re in Santiago, Chile, with a travel virgin, his friend in a thermos and a couple of crazy Irishmen on a hunt for some ‘craic.’”

But whatever comic misadventures he set out to commit to film on his shoestring budget, Mandt proves again and again in Last Stop for Paul that he was ready when the time came.