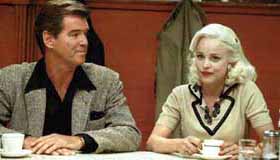 Like Mad Men, the brilliant cable series on AMC, Married Life delves into the subtext of conventional American society before progressive politics and the counterculture changed everything. The film is set in 1949, but could just as easily take place at any point in the subsequent 15 or so years. Essentially a domestic thriller with comic flourishes, it says a lot about secrets and lies before videotape. Narrated by Pierce Brosnan, who plays a suave confirmed bachelor named Richard, the plot unfolds simply enough. His pal Harry (a terrific Chris Cooper) confides that he wants to leave wife Pat (Patricia Clarkson) to be with Kay (Rachel McAdams), a pretty young war widow.

Complications arise when Richard meets Kay and is instantly smitten. Meanwhile, Harry can’t bring himself to tell Pat because her probable suffering would be too unpleasant for him witness. He deduces there’s no alternative to murder, though his nervousness and wavering sense of decency get in the way.

Careful production values provide considerable period realism for this third feature by Ira Sachs, and the script he co-wrote knows just when to insert a solid dose of black comedy. Most of the wit comes from Brosnan’s sardonic commentaries as the only character with an overview of the situation. Cooper adds the necessary intensity to drive the proceedings into noir territory. The American beauty portrayed by McAdams is more complex than a mere ingénue. Clarkson, always a pleasure to watch, contributes pizzazz to her role as a woman not quite scorned.

Mad Men captures the New York milieu of 1960, with city dwellers and suburbanites only dimly aware they’re on the threshold of a mind-altering era. A decade earlier, the confused conformists who populate Married Life haven’t begun to imagine the brave new world already tugging at their hearts.