Meat Loaf: In Search of Paradise 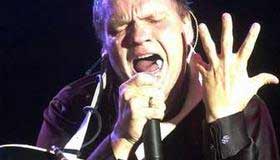 Half of making a great documentary is picking a great subject—and Meat Loaf, the 1970s superstar whose Bat Out of Hell sold more albums than Sgt. Pepper’s, is larger than life. “He’s an eternal character, like Falstaff or Cyrano,” gushes a member of his backing band, a strutting, belting, be-scarved powerhouse synonymous with motorcycles, flames and women in tight pants. Director Bruce David Klein has picked the right subject. Unfortunately, Meat Loaf hates him by day two of rehearsals for his 18-month Bat Out of Hell III world tour, and auds—particularly fans—are likely to agree.

Our first clue that something's afoul in the oven comes five minutes in when Klein explains in a defensive voiceover that the documentary has hit a few snags. Mr. Loaf’s canceled their first few interviews, and from what we can see of the first one he keeps, he’s got good cause. Klein, who describes himself as “just a casual fan,” leans so heavily on his subject to carry the weight of fascination that he hasn’t bothered to plan their first chat past steering Meat Loaf into a laundry room and asking him how he feels. That might work on a reality-show narcissist; it doesn’t on a nervous, impatient, pessimistic 59-year-old rock star with actual concerns. “What’s at stake is my reputation,” Loaf snaps, and from that moment, the interview—and, by extension, the documentary’s potential—is over. On day three, Meat Loaf informs the filmmaker, “You’re going to be more of a fly on the wall.”

The flick’s signature shots are doors closing on Klein’s camera. Meat Loaf is busy, he’s sick, he’s tired, he’s in a confidential discussion. The excuses flow forth as Klein, cock-blocked from Mr. Loaf’s intimate thoughts, is forced to shoot drunk groupies leaning on the backstage piano and collect various psych soundbites from Meat’s friends and bandmates. “He’s an angster,” says Dennis Quaid, who pops up to play guitar in Manitoba. Neighbors told him as a child he was “too fat to play with their children.” How does that reconcile with his sweaty sexual swagger of “(I Would Do) Anything for Love”? Klein doesn’t ask. Nor does he fill the film with music—there’s hardly a number to be heard except, oddly, the Stones’ “Gimme Shelter” and Van Morrison’s “Gloria,” both fine songs but flat in comparison to Meat Loaf’s grand opera.

Instead, he observes as Meat trudges backstage and wordlessly collapses on the carpet after every disappointing (to him only) concert, and advises his two foxy backup singers to dress “less hooker, more sports banquet.” Yet when the youngest songbird, Aspen, chooses booty shorts and white stripper boots for their big onstage makeout scene in “Paradise by the Dashboard Light,” she and Meat Loaf are shocked by the critics’ vehement reactions (“Like seeing a sexual assault on a security camera,” says one). In desperation (and laziness), Klein forces the “Paradise” debacle as his documentary’s narrative arc as Aspen and Meat Loaf try a number of misguided efforts to cut down on the number’s creepiness—none of which involve putting her in actual clothing. Maybe a black bra will make her look older?! Maybe a wig will make him look younger?! Meat Loaf’s wry, singed smile when he realizes the way to rescue his latest tour is dressing up in drag as his younger self makes us think back to his earlier insistence that this documentary isn’t going to be “about 1994 or 1987—it’s about here and now.” Does Klein make the connection? Like hell.