close
Think of it as Vision Quest — on crack. 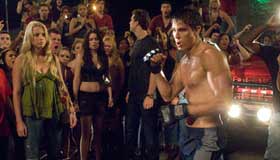 Jake (Sean Faris) is a kid whom a recent family tragedy has left with the kind of deep-seated psychological trauma that manifests in bursts of anger and hitting things, mostly other people. His frazzled mother (Leslie Hope) moves him and his little brother (Wyatt Smith) to Florida so the younger brother can attend a tennis camp and maybe Jake can pull it together before things go really wrong. Jake finds himself in a new high school, surrounded by beautiful kids from various economic backgrounds who don’t really look like they’d ever be in the same high school, but whatever. These kids like to beat the slop out of each other in underground mixed-martial-arts fight-clubs that make the rounds via cell video and the internet. It’s all the rage.

Pretty much all of Never Back Down is shot like an episode of Punk’d, with a soundtrack from an MTV2 playlist. Which is all perfectly appropriate and kinda fun. And, for all its actual brutality—there are a lot of fairly explicit, but not unheard-of, fight scenes— Never Back Down is actually not really so much about the fighting if you know the genre. Sure, there’s a lot of fighting, it’s just not the point in the way that the “sport” played is never the point in any sports movie. Still, its framework is that of a classic sports movie with all the proper iconography: the evil nemesis (Cam Gigandet), the wise master (Djimon Hounsou), the beautiful siren (Amber Heard) and all the requisite plot-points, with a good deal of expository explanation just in case the subtleties are lost on you. They won’t be.

All the trite bits notwithstanding, including homages to everything from Rocky to The Karate Kid, Never Back Down is not intended to be your father’s pithy high school sports movie, but just has the same message, which is interesting in its own pithy way.