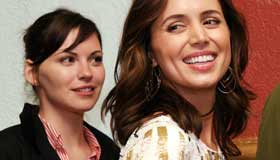 Film about working-class Bostonian who takes up the storytelling traditions of his ancestry is warm and affectionate. Balanced, if uneven, small film offers some genuinely charming moments and a view of the value of storytelling that’s both meaningful and timeless. Platform releasing may move slowly at first, but given some good marketing, this film could attract a loyal following.

After his uncle dies unexpectedly, Jack O’Toole (Joey McIntyre—yes, of New Kids on the Block) is inspired to write a play about the wake. However loving, his family doesn’t immediately offer Jack support, first reminding him of his duties to his wife and then bearing down upon his responsibilities to the family carpentry business. The words that sting the most come from Jack’s father, who undercuts Jack’s potential to be anything but a working stiff.

Jack’s brother Mike (Mike O’Malley) is a priest. Mike shows some occasional dissatisfaction with his job (something the carpenters in the family never demonstrate), and in a related vein, he’s the most understanding and supportive of Jack’s plan. After conventional methods of mounting a play fail, the local pub (located on Broadway, hence the title) offers their stage to the playwright to launch a performance of the story, entitled God Willing. Following a long legacy of Irish plays about mourning mounted in that most communal public setting, the Irish pub, these second-generation Irish immigrants recreate, without models, a tradition centuries old in their own home in Massachusetts.

It’s pure indie-genre fare, with its cast of stock characters (the crass family friend, the aspiring artist, the curmudgeon) and its occasionally self-reflexive moments about art. But among the occasional moments of predictable dialogue the film offers some truly sweet parts that feel like a return to the indies of the early ’90s, when regional cinema still felt fresh and full of purpose. On Broadway quietly responds to this loss of intimacy and chasm that grows between regional works and their more mainstream counterparts (ironically) as the subject of these differing film products grow more and more similar. The conclusion of the film is something of a call to arms for audiences as well as filmmakers, seeking to find that communal experience that plays (and sometimes movies) can provide, if only they aim to do so. And you barely notice the film stars the youngest New Kid on the Block. Not enough evidence is available, however, for me to say he has all the right stuff.