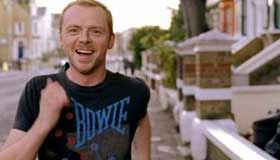 For Dennis (Simon Pegg), the sweating begins before the running. Instead of walking down the aisle toward his gorgeous—and prodigiously pregnant—girlfriend Libby (Thandie Newton), he gets cold feet (and the aforementioned hot forehead) and sprints away instead, leaving her standing in the street clutching her baby bump.

Not exactly the most charming of introductions to the lifelong loser who David Schwimmer—yes, that David Schwimmer—wants us to root for in his directorial debut. Even with a talented comic actor like Pegg playing the dodgy daddy (and reworking a script by State and Stella alum Michael Ian Black), that’s a tremendously difficult task for a first-time filmmaker—one that, unfortunately, Schwimmer can’t quite accomplish here.

Compounding the problem is the fact that Dennis doesn’t try to change directions and run—quite literally, by entering the same marathon Libby’s smarmy man (Hank Azaria) is training for—back into Libby’s arms until five years after abandoning her at the altar. When he hears the harebrained plan, even Dennis’ best friend Gordon (Dylan Moran, delightfully limning drunken dissolution) scoffs.

“Dennis,” he exclaims, “you left her at the altar when she was pregnant!”

“But that was ages ago,” Dennis says.

Maybe for him it was, but for the audience it hasn’t been that long at all—a matter of minutes. That’s the fundamental flaw that Schwimmer cannot sprint past in Run, Fat Boy, Run, despite amusing supporting turns by Moran and Harish Patel as Dennis’ softy of a landlord, Mr. Ghoshdashtidar. It’s as if Schwimmer managed to shoot himself in foot with the starter’s pistol.