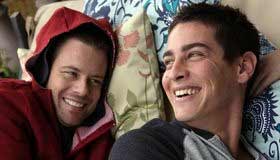 Shelter is one of the better entries in a genre whose bar has always been set bafflingly low: the vaguely-budgeted gay-themed drama. TV movie in quality, these are usually B-grade slices of empowerment porn, with gays finding relief in the sight of likeminded folks discovering acceptance and love on the big screen. Shelter, the first theatrical release from the here! Network’s Independent Film Initiative, shaves the edges off the genre’s hoariest tendencies, for which it deserves credit and will hopefully be the start of a trend. But it’s still an uninspiring drama, with a sincere, yet bland turn by top-billed Trevor Wright as a skateboarding post high-schooler from San Pedro who must choose between family responsibilities and his flowering sexuality. Box office looks to be at the high end of the very low end.

San Pedro, Calif., a “ghetto trash” beach community in Los Angeles County, is home to Zach (Wright), who lives in lower-middle-class banality with his older sister Jeanne (Tina Holmes). Sis puts enormous and unfair pressure on Trevor to care for her young son Cody (Jackson Wurth) so she can go party. Zach forfeited an art-school scholarship to become the boy’s surrogate father, so he escapes his stalled life with solitary, brooding-artist pursuits like skateboarding, spray painting and surfing. Lots of surfing. Too much surfing, actually, given that it’s just a blatant bare-chested gift to the film’s primary audience and an obvious symbol of Zach’s submerged sexuality and feelings of being adrift. But when Shaun (Brad Rowe), the older brother of Zach’s best friend, returns to San Pedro, he and Zach start hanging out. Shaun’s encouragement to pursue his artistic dreams ignites Zach’s latent sexual feelings, which explode in a lovemaking scene set to the quickening pulse of electric guitars and drums (which are better than Shane Mack’s original, yet also unoriginal, songs).

As opposed to Wright, a Shia Leboeuf look-a-like with a tough assignment that’s a shade over his head, Rowe is confident and Fox-teen-drama handsome, playing Shawn not as a gay person, but a person who happens to be gay. Their warm interaction provides the movie’s best moments, but with his sexual orientation no longer in doubt, Zach still has to overcome writer/director Jonah Markowitz’s stacked deck. It’s not enough that Jeanne is a negligent mother, she’s also a conveniently raging homophobe who doesn’t want Cody “hanging around that,” and asks of her brother, “you’re not a fag, right?” And lazy contrivances like when Shaun picks up a dusty old walkie-talkie and Zach improbably answers on the other end, show we’re a long way from the lyricism and heartfelt aching of Brokeback Mountain, surely an unfair comparison, but proof that such material can truly be transcendent.

Ostensibly, Zach’s entry exam into adulthood is choosing between the new life path embodied by Shaun and the dead-end family obligations forced upon him by Jeanne. But Markowitz wants Zach to have his beefcake and eat it, too. When Jeanne announces she’s moving out of state and needs Zach to raise Cody indefinitely, there’s no way Zach will sentence the boy to living with a lousy mother while denying the audience the prospect of two gay quasi-parents frolicking with their 5-year-old. Indeed, as an artistic, thoughtful, cute, young, skateboarding surfer kid who loves children, requires saving and needs only realize he’s gay to unlock his life’s potential, Zach is too all-purpose. But in his wistful world of bro-hugging and beach combing, Zach isn’t looking for societal acceptance or even family acceptance. He just wants to understand, and accept, himself.