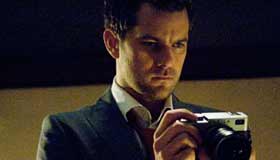 Similar to other horror fare designed to skirt by critics en route to open-minded auds, programmatic Shutter reprises tired genre tactics. A remake of the 2004 Thai ghost story of the same name, Shutter follows a married couple from their brief honeymoon in Japan to photographer Ben’s (Joshua Jackson) big gig in Tokyo. There he meets up with his questionable frat-boy buddies and haunting ensues. Rachel Taylor (in a role that might situate her as the next Elizabeth Shue) is cardboard as the diligent, mystery-cracking wife. Really, they should just call a B-movie a B-movie. Those do well on DVD these days.

Helmed by established J-Horror director Masayuki Ochiai ( Infection ), Shutter seems poised to gain the attention of tweeners, who won’t wince at its lifeless dialogue and melodramatic morality. Its PG-13 rating and basic lack of gore seem designed to be uncontroversial, but of course the result of all this anti-controversy is a really dull film.

Horror crossovers must be a new genre unto themselves, and producer Ray Lee has made a name for himself making them. I understand that this remake is tighter than its namesake, but the basic thoughtlessness of it might still be retained. In spirit, as it were.

As usual, the ghost in question is a wronged woman. She beseeches (by rather aggressive means) the assistance of Ben’s wife, Jane (Taylor), whose job it is to find out why the couple is being haunted. The haunting largely surfaces through the photographs taken by Ben and Jane: Spirit photos are a long-lived fad in Japan, and one would hardly think it necessary for that fad to be explained so thoroughly (and repeatedly) here, but so it goes. With this premise, and its built-in attention to the theory of photography, Ochiai has a golden opportunity to do something lasting and intelligent—to intrigue the thinkers in the crowd—and yet the territory is hardly broached. The fact women in this film only gain their power posthumously might be Shutter ’s sole lasting thread left for us to discuss.

The rules are static enough that we should come to expect at least a little creativity from horror scripts, but the best we get in that department are occasional references to other horrors. Moments invoke the memory of Nordic crossover Vanishing, and of course, we have the all too common invocation of Hitchcock. It’s like horror for the semi-literate—and if you watch it at midnight, you might just be tired enough for it to affect you.