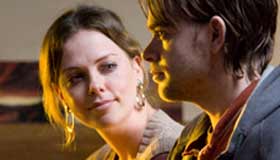 Listless if well cast, Sleepwalking smacks of indie stereotypes without showing the limitation toppling of other, more inspired fare. In fact, the film seemed to have an embarrassment of riches but not as much of an idea as to where those riches should be spent. Road trip between uncle and niece shows off high-caliber cast that does good things with lackluster, sometimes didactic script. Small audiences are likely, but better numbers will be found on DVD.

Joleen (Theron) is a self-destructive woman with dangerous taste in men. When her boyfriend is arrested for growing pot, she and her daughter Tara (Robb) are kicked out of their house, Joleen seeks shelter with her brother James (Stahl). Joleen and James fled an abusive father shortly after she found out she was pregnant. Now back with James, it dawns on Joleen how poorly she’s cared for her kid. She leaves Tara with James, intending to return for Tara once she finds a better life.

Abandoned, and without the means to offer Tara any lasting stability, James tries to make a happier situation for his niece, but she’s ultimately taken by social services to a fostering center. On her birthday, James goes to see Tara at the home and Tara refuses to go back. Realizing that their happiness can’t be found in even the social or institutional structures available to them (family, social services, employment) they go on a road trip to see what exists beyond their known universe, but when they run out of money, James returns to the one place he thinks should hold security and warmth. Sadly, his father is the same tyrant that drove him away years ago.

Stahl plays James as a man who cowers to authority, recreating in many circumstances the dysfunctional and abusive dynamic he has with his father. It seems that some beautiful insights could have been woven around this potentially complex cycle, but—in a reach for drama—the film implies this cycle can only be broken by destructive means, and so sucks all the dynamism and intrigue out of the subject and takes a good bit of fodder away from the clearly capable cast.

The great affliction of Sleepwalking is the occasionally inserted and mildly painful, on-the-nose revelation. Direction is largely clean and logical—not phenomenally inventive, but logical—yet the theme of sleepwalking only really carries through in one scene. It’s apparent some meaningful visuals are being approached here, but it seems like the film keeps missing its mark. One can imagine this film getting warm receptions at festival, but such only proves that it’s a harsh reality outside of the Sundance bubble.