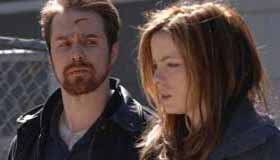 Three couples at different, yet all difficult, points in their relationships find themselves deeply affected, whether directly involved or peripherally, when tragedy strikes during winter in a small Pennsylvania town. At the center of the story is Arthur (Michael Angarano), a teen trombone player in a pink stocking cap who is experiencing love for the first time with Lila ( Juno ’s Olivia Thirlby). An only child, he watches his mother (Jeanetta Arnette) struggle as his dad (Griffin Dunne) moves out.

At the Chinese restaurant where he buses tables after school, Arthur works with Annie (Kate Beckinsale), on whom he’s had a crush since she used to babysit for him. Split from her husband Glenn (Sam Rockwell), Annie is raising their daughter alone, caring for her aging mother and carrying on an affair with her best friend Barb’s (Amy Sedaris) husband Nate (Nicky Katt). Glenn has returned from some time away following a suicide attempt, optimistic and newly born-again, but still an alcoholic and increasingly unpredictable and dangerous.

From Glenn’s sloppy, drunk violent streak to Annie’s short temper with her young daughter to Nate’s clumsy slip during a moment of crisis, this stellar cast uniformly captures both the flaws and the humor of their characters amid the pathos. Once again turning his lens on the casualties at the edges of society, writer/director David Gordon Green ( All the Real Girls ) uses his camera to manage emotion, going handheld and quickening the tempo of the edits at times of rising panic and drifting off-center during moments of despondency. The cumulative effect is meditative and devastating.