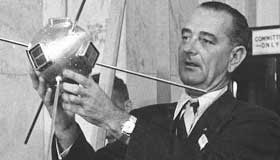 David Hoffman’s doc based off of Paul Dickson’s tome The Shock of the Century retreats backward in order to jet light years ahead by pressing historical pressure points, namely, Sputnik rocketing into orbit—pitting two superpowers (the USSR and the USA) into an arms race where World War III hung in the balance.

All the cut and cropped archival footage came from uncommon sources. The 1950s kinescopes were bid for on eBay and 16mm film was acquired by Russian filmmakers-turned-thieves when the Berlin Wall came tumbling. The material features clips of soaring rockets, close-ups on fiery crimson explosions and surly-tinted masquerades by the “enemy.” The work breaks through academic gates and has enough giddy-up to go beyond just a PBS landing—instead engaging audiences of all walks who are curious about what dire consequences could have been had ego gotten the upper hand. It also sets parallels to present war days where the themes of fear and hubris are never to be taken lightly.

Access is Hoffman’s most effective tool. Granting the audience entrée to top-secret footage—much of which is declassified intel—paired with charming but remedial animations of the period works to arm the viewer with a sense of privilege and purpose even in hindsight. In a sense, you’re being debriefed and must make a determination on the best recourse. You certainly don’t feel like a grad student at the back of the library stacks combing through rolls of microfilm. The firsthand accounts of sensitive missile sites, critical meetings deep in the throats of mountains near and far and candid interviews from then and now featured the best minds of the time. Add vox-pop sweeps from America’s gung-ho youths toying with bottle rockets (or as they are referred to by tomorrow’s scientists, “pipe bombs with fins”) to Russians showing off their moxie in mock drills gushing smiles as they remove their gas masks and it’s all stewed together nicely.

When Sputnik blasted off into orbit, the USSR had been painted as backward and savage. But Russia was now a player—stealing the world’s eyes and ears. The gravity of Sputnik-1, touted as the first shot in the Cold War, and later with the advance of Sputnik-2, which was piloted by a brave cosmo-dog named Laika, is clearly evidenced in the headlines of domestic broadsheets, talking heads, acclaimed scientists, military men, ripe politicians as well as the fear-mongers who would stop at nothing and risk everything to maintain nationalistic prestige. The feat also kicked America’s rear into gear to figure out how best to respond. Throughout the tribulations and triumphs, the nation swallowed hard medicine. But perhaps the film reveals that, with its back against the wall, the U.S. figured out that a peaceful space was in the best interest of humankind. And thus NASA was born.

There is a sense that the filmmaker didn’t hold back in his portrayal of how critical the state the world was in and took a hardnosed look at how many of those in power ruled and slanted information absolutely. For Sputnik may have set-off the Space Age, but it also reinvented the media mechanism. The sharp Sputnik-centric timeline of the film, Liev Schreiber’s steady narrating chops and the points of view from each side all energize the content. Ronald Regan waxes anti-Communism pleas, but sandwich with Edward R. Murrow’s poise, they offset each other. The sit down with Sergei Khruschev (son of Nikita Khrushchev, whose blasting speeches are rehashed), sitting in his living room was legend. His jocular yet personal commentaries are cleverly spread throughout the film. He even declares at one point that, “The first communist was Jesus Christ.”

Visually opening up the bound book without meddling much with the nuts and bolts is how some of the best documentaries get made. And given the film’s theme and purpose, it is a pleasant moment to look at what byproducts dot-com money (the exec producer founded Priceline.com) can do. Further, credit a Cold War historian and enough science folks with scale-breaking IQs and you got something unlike anything out there.