close
Peirce's take on Iraq is a gripping and compelling achievement 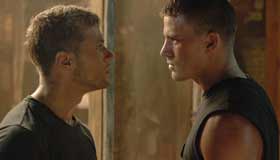 In director and co-writer Kimberly Peirce’s gripping wartime drama, a young American soldier survives all the harshest and cruelest circumstances of war and returns to his Texas hometown. Set to resume his civilian life, he finds that he’s been Stop-Loss ed and is required to return to Iraq for yet another tour of duty. Rather than suffer the abuses of the over-reaching government he believes has betrayed him (along with the men and women who served and died honorably beside him), Sgt. Brandon King (Ryan Phillippe) considers his options and decides to go AWOL. Given its stylish presentation and MTV-generation production values, Peirce’s first feature in nearly eight years should resonate with its target audience and their parents much in the way Spielberg’s Saving Private Ryan resonated with the WWII crowd and their kids.

The film manages to walk a line that is not antiwar in the main, but is distinctly pro-soldier, and thus takes pains to speak to the plight of the American serviceperson, even if that means taking to task the government and the society that sent those servicepersons to war. To that end, Stop-Loss is the name of the Department of Defense policy that allows for the retention of military personnel who would otherwise be eligible for separation from service as they have honorably carried out the terms of their service contracts. Which, in the case of today’s service, usually means having served in one of the two theatres of war—and often for multiple tours of as much as 15 months.

Irony is always grandest during wartime.

The policy is not new to these current wars. It’s not even necessarily a wartime policy. But it is being used for the first time as a broad tool of retention for the conduct of these wars, and its effects are more isolated to particular groups of the population as these wars are being prosecuted by all-volunteer forces of young women and men not from a (drafted) wide swath of our society as has been the case with other wars.

Boys Don’t Cry director Kimberly Peirce and co-screenwriter Mark Richard found the issue of stop-loss intriguing and—frankly—disturbing, and have thus crafted a film about the practice and its effects. While fictional and necessarily stylized for a particular audience (i.e. the MTV-aged-potential-enlistee), Stop-Loss is nevertheless the most effective and engaging film about the current wars and their ravages on those who are actually waging them.

The film is, in production value and scale, light years from the austere Boys Don’t Cry, which brought Peirce to note in 1999, yet it retains the sense of earnestness of that film—which was actually her sophomore effort, rather than her debut as often reported. In particular, Ryan Phillippe as the young Sgt. King, with his wide-eyed sensitivity, his definitive sincerity in all his beliefs, however contradictory, is at once a sword of his nation and a sincere humanist who only wants to protect his men and live and die in his hometown—and is, as such, the every-soldier. As the everyman or everywoman, it is impossible to reject him, no matter how one feels about the wars.

It was not until the late 1970s, some four or five years after the end of the Vietnam War, that Hollywood began to produce films of significance about that conflict and its many tragedies. The Deer Hunter (1978), Apocalypse Now (1979), Platoon (1986), Full Metal Jacket (1987) and a smattering of others reaching into the early ’90s all required the distance of some years to capture some aspect, real or fictionalized, that was reflective of something true, sad, wrong, foolhardy, inept or otherwise bad about that war. Stop-Loss manages to pull off this exceptional feat in the midst of a host of failed contemporary war films, which is in its own way is a kind of achievement.