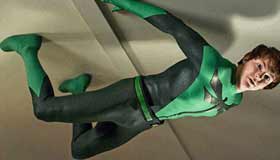 A slambang parody film that’s actually funny. Scary Movie franchisee Craig Mazin’s script about a super bug that gives a super geek superpowers hews closely to the template, but is peppered with enough clever jokes that will deserve the big box office these popcorn flicks usually rake in.

The first sign that writer/director Craig Mazin’s mash-up/send-up is smarter than the rest of its junk-drawer gag genre is that there’s only one crotch joke in the opening credits’ costume close-up shots. Immediately after, hapless nerd hero Rick (Drake Bell) gets whacked on the head three times in 10 seconds. And from there—shockingly—the flick gets good. Mazin’s formula is two parts Spider-Man, one part everyone else. One fateful day at a genetics lab, Rick douses himself in what he thinks is H20, but is really H209, a cross-species aphrodisiac, and before you can say “snail rape” (which happens), he’s mounted by every creature on Noah’s Ark—including a biting dragonfly that injects him with, um, dragonfly superpowers. (Including sticky palms, which most teen dudes have already.)

Rick’s secret green spandex status as Dragonfly sets him up on a collision course with evil Lou Landers (Christopher McDonald), a scientist suffering from a fatal tuberculosis-like illness. Upon being spotting with crimson clots in his handkerchief, Lou assures civilian Rick that “this is the healthy coughing blood.” Of course, Lou’s cure causes the death of innocents and blah, blah, blah, but the plot here is like, so beyond the point. Dragonfly becomes the toast of Empire City, proven by Perez Hilton scrawling “Fag-onfly” across his picture. In a sequence that’s oddly short (but just long enough to allow a cameo-ing Pamela Anderson to sap its energy), he’s invited by Professor Xavier (Tracey Morgan) to visit his School for the Non-Asian Gifted, where fellow students include Sneezo and Barry Bonds. Meanwhile, Rick flirts with neighborhood beauty Jill Johnson (Sara Paxton, sincere but holding her own), fends off his exploitative best friend Trey (Kevin Hart) and learns from his guardian Uncle Albert (Leslie Nielsen) that “with great power comes bitches.”

With jokes packed as tightly together as sliced cheese, the flick’s comedy axiom seems to be: Never give the audience a pause to second-guess their laughter at a Pomeranian ground into tartare. (I laughed hard.) In a nice break from the slop spoofs of late, the gags are situational, not referential; Mazin doesn’t expect to earn bonus points from referencing Tom Cruise’s insane YouTube clips. The punchline is Cruise’s (Miles Fisher) boast that Scientology can make him fly (cut to a newsman intoning his death). Stephen Hawking (Robert Joy) pops up to give an anti-motivational speech to Rick’s classmates at Empire High saying, “I think about suicide every day.... My nurse is a lesbian, and not the hot kind.” But really, he’s just there to get stung by killer bees as his robot voice chirps, “Ow. Ow.” And Mazin’s rule for truly dumb jokes is to keep inflating them until we give in and guffaw. It took four times, but I finally cracked up at Aunt Lucille’s (Marion Ross) flatulence during Rick and Jill’s big love speech. My self-image is shattered. Now go shatter yours.