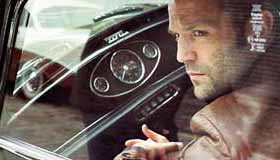 Heist homage to British crime comedies includes all the themes of the genre plus a clever turn with an unsolved mystery. Acting and directing are consistently high caliber, but relatively de rigeur for the lot. Though some of the dialogue is occasionally hard to understand, the film is fetching and fun, and certainly accessible enough to rake in good numbers from every corner of the globe it travels.

The Bank Job is inspired by the real-life robbery of a Lloyds Bank in 1971. While the heist was in progress, a ham radio operator intercepted the thieves’ walkie-talkie transmissions and reported the crime to the police. The story was an overnight media sensation. Two days later, the story was D-noticed by the government, which told the media that reporting more on the matter would endanger national security. When the vault, full of mangled safe-deposit boxes, was re-opened, the bank permitted the owners of the boxes to come in and declare their holdings. Something over half of the holders of boxes declined to identify their valuables.

Screenwriters Clement and La Frenais take many clever turns piecing together this national saga of corruption and espionage. By locating historically current facts near to the characters of the heist, they paint the larger portrait of a superpower crumbling under the weight of its own decadence.

The hero, Terry (Statham) is down on his luck and makes a living as a swindler of sorts. When he’s offered the job to take Lloyds, his goal is to get out of crime for good. This working-class antihero is technically not so honorable, though his intentions are rooted in good. He has the security of a loving wife and family and is, at times, painted as a “regular bloke” just struggling to keep on. However, even when the police (the honest ones) are added to the mix of Scotland Yard bodies, heavies, barristers and (possible) double agents, it’s the “regular bloke” that outfoxes the lot. At one moment, a crook corners Terry against the stairwell of an old train station, and the station’s foundation literally shifts, providing Terry with a brick to use for defense. This bastion of British security, like the crown, Scotland Yard and Lloyds of London, could be taken because the context was so malleable. Meanwhile, the nation’s binding glue was the blue-collar family man. So this film, with its 70-odd speaking parts and tentacle-like characters associations, ultimately tells the story of an England in danger of losing its hard-won honor.

However, the story reminds us this turn in history is not the first trial by fire the nation has suffered. Digging beneath the ground to the vault’s floor, Terry falls through a sewer wall and into an underground burial chamber for plague victims. While this less-than-reverent tomb provides the gang access to the secrets and fortunes of Marylebone’s power elite, it also serves as a reminder of the durability and the tenuousness of the nation. Epilogues show the “light at the end of the tunnel” with information about the purging of corrupt cops and MI5 agents after the heist, but this morally ambiguous tale isn’t as interested in the happy ending as it in the joy of the hunt.