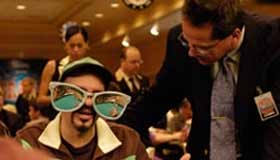 The Grand, an improvisational comedy about six poker players who’ve descended upon Las Vegas for a $10-million tournament, is director Zak Penn’s ( Incident at Loch Ness ) latest opportunity to prove that he’s not quite Christopher Guest. The movie’s low-budget, low-radar approach will keep box office numbers similarly low, despite the impressive cast, many of whom are poker aficionados. But Penn has crucially miscalculated, mistakenly assuming we’d rather watch comedic actors play poker instead of watching them be funny. It’s especially disappointing because the humor is occasionally inspired, while still being genial enough to not lose points when jokes don’t land.

Despite the large, freewheeling cast, audience interest rests primarily with Jack Faro (Woody Harrelson), who’s been living in a rehab facility for years after having ingested heroic amounts of drugs for far too long. Jack, a veteran of 74 marriages, needs the $10-million purse to buy back his grandfather’s Rabbit’s Foot Casino, which has been bought by real estate developer Steve Lavisch (played by Michael McKean in a blatant attempt to connect this film to the genre’s Guestian classics). Lavisch’s plan is to raze the Rabbit’s Foot and build two enormous towers. Each tower would be one gargantuan room, costing a million dollars a night, proof not only that Lavisch is nuts, but that the film’s funniest moments are its most scatological and ridiculous.

The other major storyline concerns brother-and-sister poker pros Larry and Lainie Schwartzman (David Cross and Cheryl Hines). Larry, often seen wearing a hat promoting ICan’tBelieveIGetToPlayPokerDotCom7777.net, is an obnoxious sort partial to dressing in a hijab to confuse opponents and studying predators so he can be “a predator at the table.” In the eyes of his father Seth (‘70s sitcom icon turned poker master Gabe Kaplan), Larry has always taken a back seat to Lainie, whose husband Fred (Ray Romano) immerses himself in fantasy football in a transparent attempt to retain a shred of masculinity in the presence of his poker-playing wife.

Having watched hours of poker on television (and hosted games at his home), Penn knows how to replicate the experience, right down to the fancy TV graphics and Best in Show -style TV commentary from an unctuous anchor incessantly plugging his Werbe Method of conquering poker (slogan: “Winning is winning!”). Indeed, every character is colorful, if not downright disturbed, and played to the hilt via some brilliant casting choices. The final table includes The German, an uber-dramatic, bunny-loving Euro-bad guy who argues that Vegas is a “place with no irony.” The German is played by famed Munich-born director and real-deal iconoclast Werner Herzog. The introductory shot of him at a low angle marching down a hotel corridor to ask the front desk for “more hand lotion” sets a bar for inspired lunacy that the rest of the movie becomes less and less interested in living up to. Except, that is, for SNL ‘s Chris Parnell, who gives the movie’s funniest performance. He plays oddball Harold Melvin, a mumbly, Rain Man -type taken to quoting from Frank Herbert’s Dune and drinking “brain juice.” In Herzog and Parnell, we see what the movie could have used more of had Penn been willing to dump some of the poker intricacies to keep everything moving more smoothly.

The toughest challenge in the faux-doc game that took modern root in This Is Spinal Tap is creating a tight story with dabs of real emotion that don’t play as lip service. The Grand feels like a rough cut and, while it may be unfair to mention, no documentary director ever had the opportunity to utilize a Hitchcockian dolly zoom, meaning Penn is willing to abandon his concept for an unnecessary shot of style. Ultimately, of course, such transgressions would hardly matter if the film were shorter and consistently funny. Also, there’s a staleness to the subject matter that can’t be overcome. The sport (yes, there are some who consider it a sport) was red-hot about three years ago, when night owl, basement competitions featuring A-listers like Tobey Maguire led to poker shows on basic cable. Now, poker and the improvisation comedy it inspired gives off the tired whiff of 2005. Maybe Penn’s next film should revolve around Pog collectors.