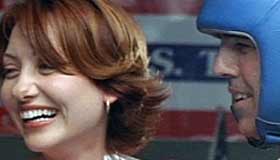 Adam Carolla, the former co-host of TV’s The Man Show and the current syndicated radio personality, steps into the ring for the first time as a leading man in The Hammer, and while this rock’em sock’em rom com about a middle-aged man’s unlikely return to the world of amateur boxing doesn’t quite score a knockout, it lands a respectable number of body blows—and belly laughs.

The latest Adam Carolla Project starts out with its coulda-been-a-contender hero, former Golden Gloves Jerry Ferro, on the ropes mere moments after answering the bell on his 40th birthday. When his sidekick Ozzie (Oswaldo Castillo) asks Jerry if how he plans to celebrate during the pre-dawn drive to the construction site where they’re working as carpenters, Carolla demonstrates his trademark self-deprecating deadpan.

“Oh,” he sighes, “thought I’d go to my crappy job and get yelled at by my angry boss.”

“You did that last year,” Ozzie scolds.

But by the end of the day, Jerry’s routine existence has been shaken up: His foreman has fired him because of his insubordinate sense of humor, his girlfriend has left him because of his inveterate lack of ambition. And, after a chance meeting when Jerry is called upon to rehang a heavy bag that a visiting professional fighter has knocked down at the gym where our hero teaches boxercise classes, a big-time trainer has invited him to train for the U.S. Olympic Trials. Soon enough, the perennial underachiever starts to discover a renewed sense of purpose while trading punches with a new sparring partner (Harold House Moore) and sarcastic comments with a new romantic partner (Heather Juergensen) whose idea of a pre-fight pep talk is “don’t take too many shots to the face.”

What elevates a movie that might, at first glance, look like a vanity project—Carolla also executive produced and developed the story, which is based in part on his own life—out of the amateur ranks is the unlikely combination of his guy’s-guy humor with the bittersweet (science) sensibilities of Juergensen and her Kissing Jessica Stein collaborators, director Charles Herman-Wurmfeld and his sister/producer Eden Wurmfeld. Their talents have The Hammer in fighting trim by the time Jerry strides toward the ring for the final fight, wrapped in a stolen Holiday Inn bathrobe personalized with strips of black electrical tape.