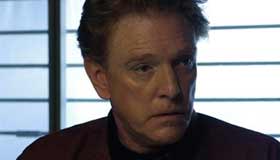 In this bilingual kidnapping thriller set in Colombia, writer/director Antonio Negret employs too many characters, backstories and plot tangents to address a subject that’s unwieldy enough already: an entire nation riddled by violence. His use of distractingly trendy cinematic techniques also renders the effort toothless. Colombian ex-pats and other South Americans may turn out, though it will test their national pride, and the presence of Ugly Betty ’s America Ferrera — who also executive produced — won’t necessarily draw crossover moviegoers.

Negret appears to believe Colombia is on the verge of having every point of light snuffed out. An exaggeration perhaps, yet the film is nothing if not pessimistic. He begins by displaying a downbeat Colombian proverb, “He who must die, must die in the dark, even though he sells candles.” Then, without further ado, we see a young man get hit over the head and kidnapped in the street. He turns out to be Jose Gutierrez (played by the handsome, baby-faced Roberto Urbina), the early-twenties son of a banker home for vacation from studying in the States, where he’s in a steamy relationship with a gringa co-ed. Because the movie does not unspool in linear fashion, jumping back and forth in time, it’s a while before we learn that Jose is the abductee kept beaten, bound and gagged on a bathroom floor.

Ferrera plays his hometown squeeze, Luiza. She’s with him when he’s snatched, and her behavior, crucial to the story, requires further exploration. Three Americans (ex Special Forces, FBI and CIA) whom Jose’s father hires to handle the kidnap and ransom demands comprise the other main set of characters. While one plans a commando raid to free Jose, another (David Sutcliffe)—who, a propos of nothing, is haunted by a line-of-duty friendly fire incident—rushes the ransom money to the drop off. These mercenaries are meant to highlight the deleterious influence of outsiders, so it’s unclear why we are supposed to care. Negret also throws in unformed material about the kidnapper and his son.

The kaleidoscope effects Negret deploys are as annoying as the random plotting. He indulges in a plethora of close-ups using an unpleasantly jittery handheld camera. The movie contains more arty shots of religious imagery—angels, votive candles, crucifixes, Jesus statues—than in a broadcast of Christmas Eve Mass from the Vatican. There’s even a priest who stashes a cache of weapons in a cemetery. Yes, Antonio, we know Colombia is a Catholic country. In a few lighter interludes, he has Jose, an amateur photographer, roaming through the streets aiming his lens at the architecture and innocent citizenry. You know, quaint doorways and old women hanging out of windows. Toward the end, Negret must have realized he used too many shots of mangy dogs to lend local flavor and included a one-eyed cat.

According the press notes, the scenario is rooted in a harrowing experience that Negret’s family endured and the movie is an expanded version of a short film he made about it. Unfortunately, Towards Darkness doesn’t come off as especially authentic. It feels like the vision of an outsider (Alejandro Gonzalez Inarritu perhaps?), with the attempts to show the vibrant potential of the country as studied as the violence. No doubt Columbia has been torn asunder by rival militias, political ideologies, drug cartels, and, although he doesn’t emphasize it, a divide between rich and poor. The script ticks off in stilted fashion the myriad reasons for the kidnappings and insecurity; and statistics put up at the end are meant to bolster the bleak outlook. Twenty-four-year-old Negret shows some promise as a director (if not a writer), but this bulging effort is too diffuse and immature to successfully expound a sweeping or shocking vision. Less would have had more potential to enlighten and darken.