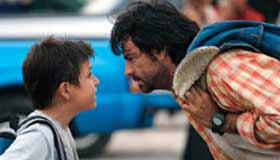 After the sudden death of his grandmother, 8-year-old Carlitos (Adrian Alonso, The Legend of Zorro ) sets off to cross the Mexican-U.S. border in search of his beloved mother Rosario (Kate del Castillo, Trade ), who has been working illegally in the States to support her family south of the border. Along the treacherous journey, Carlitos is befriended and helped by a number of people, including Marta (America Ferrara, TV’s Ugly Betty, Real Women Have Curves ), who smuggles him across the border in the false bottom of a coffin, and Enrique, an itinerant day laborer played by noted Mexican television personality Eugenio Derbez. Meanwhile, Rosario (del Castillo) is overwhelmed with trepidation (which results in a lot of crying) when she learns of the death of her mother and what Carlitos has done to reunite with her.

Indeed, upon counting the number of times the myriad characters cry in Under the Same Moon, it seems perfectly reasonable to refer to this little drama as a "tearjerker" without a hint of irony or sarcasm. In director Patricia Riggen’s feature debut, the waterworks flow so freely it seems as if someone is crying in every frame. Generally this sort of on-the-sleeve earnestness is irritating, but here it grates less than usual, mostly because of the very present resonance of the issues. Families are in fact being torn apart by both Mexican and American immigration policies, the results of which are very often quite tragic.

But mostly the movie floats on the sincerity of Alonso as Carlitos, who is incapable of doing or saying anything that one does not believe, and del Castillo as his young, hardworking mother. Luminous and familiar, she represents so many young Latina women who toil anonymously in support of their loved ones so far away. Jeez, now I'm crying.