Wetlands Preserved: The Story of an Activist Rock Club 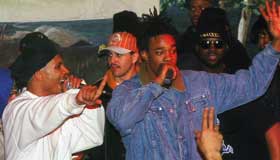 It’s no surprise this documentary about the relatively short-lived New York City nightclub, environmental center and tie-dyed toking parlor Wetlands Preserve won a High Times Stony Award. Not a prestigious cinematic laurel, yet well deserved. Reeking of pot (even without being exhibited in Smell-O-Vision), the film has an appropriately loose, catch-all construction and jagged texture that’s only problematic when short shrift is given to the music that was made inside this Mecca of the jam-rock scene between 1989 and 2001. While partly attributable to the improvisational musical idiom, it reflects both the upside and downside of the stoner aesthetic. For patrons, employees and talent whose recollection of time spent there is a little fuzzy, watching Wetlands Preserved will trigger flashbacks. For those who never made it, it’s a useful time capsule — a generously baked history of a minor pop-culture institution. Dead Heads and other connoisseurs may be motivated to seek it out, but no one is going to get rich on the movie’s release.

In 1989, Larry Bloch founded Wetlands Preserve at 161 Hudson Street in Manhattan’s Tribeca neighborhood to showcase a laidback style of rock ’n’ roll (preferably enjoyed live) and to support environmental awareness. He wanted his “eco-saloon” to help combat corporate greed and promote green causes by serving as a gathering place and by funding a Center for Social and Environmental Justice with its proceeds. Blues Traveler became the house band, and acts like Phish, the Dave Matthews Band and Pearl Jam were fixtures. Tuesday nights were called Dead Center in honor of the Grateful Dead, who sadly never appeared, although Bob Weir did perform there with the Hanson brothers—there’s that eclectic stoner aesthetic again. Affectionately nicknamed Sweat Glands since the A/C never worked properly and it got stiflingly hot, the venue’s legal capacity was 389 but well over 600 people routinely crammed in to the quirkily laid out space. A converted VW bus was parked in the middle of the space and now resides in the Rock ’n’ Roll Hall of Fame. Also fondly remembered are the bathroom’s psychedelic murals, the bad sight lines and gigantic sewer rats that probably came for the contact high.

First-time director Dean Budnick, an academic, has made a traditional talking-head documentary except for brief musical interludes during which snippets of relevant songs play, accompanied by corresponding photos and footage overlaid with digital animation created by artists affiliated with the RES Media Group. The graphics are cool enough, but the subject matter cries out for more music, which could supplant some unnecessary commentary by Gotham historians like Kenneth Jackson and a few former employees who get more than their fair share of screen time. Michael Musto of the Village Voice is funny turning his nose up at the “hippie-dinosaur” clientele, while acknowledging the niche Wetlands Preserve occupied in the downtown scene. A colleague from the paper overreaches by comparing it to 52nd Street during the bebop era. The green activism side of the operation is dealt with sketchily, perhaps an indication that the music was paramount. The detail-oriented Bloch, known to fuss over the stereo mix in the bathrooms, apparently put everything he had into his baby, and it cost him his marriage.

His personal burnout, combined with Mayor Rudy Giuliani’s quality-of-life crackdown and increasing complaints from neighbors, compelled Bloch to seek a sympathetic buyer, someone who shared his vision and would try to continue the club’s mission. That turned out to be the then 23-year-old Peter Shapiro. Shapiro, who appears on screen, produced Wetlands Preserved as well as the recent IMAX concert documentary U2 3D. His role in the club’s history and his role in getting this movie made don’t represent a conflict of interest exactly. He just knows a good subject for a documentary when he buys it. And if the movie’s title sounds self-serving as well as self-referential, it’s also not strictly accurate since Wetlands Preserve didn’t last. It’s now condos. Although located in the shadow of Ground Zero, the club’s demise came before 9/11; in fact, the last show was on September 10, 2001.