close
Normally in a snoozer like this, we’d be checking our own watches—but this movie does it for us 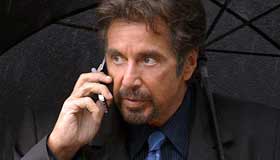 After having been played in most international territories and on DVD in many parts of the world, this woefully inept, long-on-the-shelf Al Pacino vehicle finally gets a U.S. release. FBI forensic psychologist Dr. Jack Gramm’s (Pacino) testimony put a serial killer away nine years earlier, but now—on the eve of the killer’s execution—doubt is cast on his guilt as new suspects emerge and a threatened Pacino must race against the clock to prevent his own death. This unintentionally funny, hopelessly predictable and sleazy crime thriller is clearly a production its star did for the money. Returns for the studio and theatre owners will be meager at best, especially after word gets out opening weekend.

The picture opens with a brutal murder, then the trial and death sentence of serial killer Jon Forster (Neal McDonough), who believes he was convicted solely on the basis of Jack Gramm’s testimony against him. As he is carted away, he utters the words “tick tock” directly to Gramm, a threat that becomes even more pronounced as the story moves ahead nine years to the fateful day of his planned execution. As it turns out, though, a new murder with his signature took place the night before and the victim is one of part-time professor Gramm’s university students, giving officials reasonable doubt about the guy they sent to prison nearly a decade earlier. As Gramm fights to prove it is all the work of a copycat, a second similar murder takes place and—most ominously—he begins receiving a series of eerie phone calls pronouncing he has just 88 minutes to live. The amateurishly written shenanigans continue as Gramm begins to suspect it may be an inside job and, in a breathless quest for the truth, enlists the aid of his assistant (Amy Brenneman in a thankless role) and his brightest graduate students to help, particularly two women played respectively by Leelee Sobieski and Alicia Witt. Unfortunately for him, his mysterious past starts to cast doubt on his future as even colleagues from the FBI start questioning his motives.

The central gimmick of the film is the (virtual) real time that passes as Gramm races for his life may not be wholly original, but it’s solid. However, in director Jon Avnet and screenwriter Gary Scott Thompson’s hands, it turns into complete nonsense; a laugh-out-loud thriller that isn’t meant to be funny. Character motivation is an alien concept here, and things aren’t helped by the frequent cell phone calls to Gramm stating he has 83 minutes to live, then 76 minutes, then 68 minutes and so on giving the audience an exact running count of just how much longer they will have to endure this overstuffed turkey. Normally in a snoozer like this, we’d be checking our own watch but this movie does it for us. Actually, the filmmakers couldn’t even get the timing right, since from first phone threat to last it’s only 76 minutes (out of an interminable overall 105-minute running time). With a hairstyle that looks like a fright wig, and wide-eyed readings of lines like, “someone is trying to scare us “ (after a motorcycle nearly flattens him and Witt), Pacino hits a career nadir and the legend loses a little luster.

Fortunately for the great Al—and us—this one ought to be in and out of theatres in just about 88 hours.