close
Anamorph may only appeal to fans of serial-killer genre 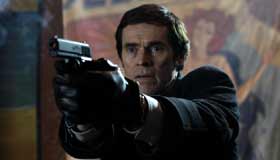 The agony outweighs the ecstasy when a serial killer versed in techniques used by Renaissance painters to create perspective makes Willem Dafoe’s homicide detective his patron. Plodding if picturesque in a dark, forensic sort of way, this New York-set crime drama isn’t a museum piece, yet shouldn’t be consigned to the dustbin, either. There’s always a chance it might gain a following amongst art historians and connoisseurs of Dafoe.

Tortured cops litter the streets of celluloid Gotham, and Dafoe’s example, Stan Aubray, has the common trait of being on the sauce. He varies from the template slightly in that he’s an obsessive-compulsive, more because he’s an art lover who likens homicide investigation to art criticism and treats crime scenes as paintings. To select furniture for his eerily meticulous apartment, he meets his shady art dealer (Peter Stormare) in a local bar. Five years ago, Aubray was credited with bringing down a serial slayer dubbed “Uncle Eddie,” but doubts linger about whether he got the right guy. He’s also haunted by memories of one victim, a prostitute whom he couldn’t save.

Now, copycat killings with a similar yet more sophisticated M.O. have begun. The murderer designs gruesome tableaux containing hidden images for Aubray to detect. Resembling the paintings of Francis Bacon, the handiwork exhibits vivisected and dissected bodies and employs elaborate decorating and framing devices. Our artful butcher teases Aubray by putting an oil painting of the first crime in the window of an antique store near his house. Aubray’s aggressive partner (Scott Speedman) is suspicious from the start and the chief (James Rebhorn) becomes increasingly concerned. A second prostitute Aubray has befriended appears in a couple of short scenes before ending up in the killer’s sights.

Dafoe doesn’t make much of an effort to animate his blandly stiff cop. The bad hairdo might have something to do with it, but his performance isn’t the primary issue. Michelangelo could have completed half the Sistine Chapel in the time it takes for this canvas to unfurl. While the cinematography is generally accomplished, the camera tends to linger without discriminating between what belongs in the foreground and what should remain in the background. The plot is far more distorted than the visuals. Penned by director H.S. Miller and co-writer Tom Phelan, the screenplay can’t sustain much interpretation and is thin and wishy-washy when it counts the most, during the atrocious climax. Any hope that the perpetrator might turn out to be a person of genuine interest (Metropolitan Museum of Art head Phillipe De Montebello, say) are dashed. He’s a minor artist, and Anamorph is an academic thriller likely to engage only avid collectors of serial-killer flicks.