close
With Baby Mama, an across-the-board great comedy is born 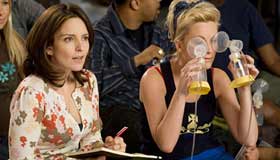 At this moment in gender warfare, men are babies and women are having them. In Knocked Up, a woman and infant matured Seth Rogan from a kid to, let’s be honest, a kid who shaves. Writer-director Michael McCullers’ riotous but subversively sincere comedy uses the same tools with better results in an across-the-board great comedy that should rack up strong box office.

Tina Fey stars as Kate Holbrook, a 37-year-old career woman who has reached the position of vice president of a Whole Foods-esque Yuppie mart without anything living inside her belly besides raw yeast rolls. She doesn’t seem maternal (but to her credit, Fey looks sweet sniffing a stranger’s infant in a crowded elevator), but we’re assured she must be because she’s hallucinating babies which are already as omnipresent as pigeons in her trendy Philly neighborhood. Even her doorman has two baby mamas. Now, Kate is about to have baby-mama drama of her own. With all other fertility options dismissed in the first two minutes by an obstetrician who pronounces flatly, “I just don’t like your uterus.” The egg is Kate’s, but the incubator is Angie Ostrowiski (Amy Poehler), a Slurpee-guzzling high school dropout encouraged by boyfriend Carl (Dax Shephard) to rent out her womb for $100,000 via Sigourney Weaver’s surrogate agency.

Sensible women spend the first 10 minutes clutching their armrests in anticipation of yet another movie that insists on a dichotomy between career and family and anal retention and uterine hospitality. At first, Kate is as pinched and coaster-obsessed as Jennifer Garner in Juno. But McCullers’ script—thankfully—quickly loses its fixation on femininity (and while costume designer Renee Elhrich Kalfus keeps Kate in structured neutrals, she’s allows curvaceous skirts and sexpot heels). This isn’t a comedy about money versus love or women versus men. It’s about Barack Obama voters versus American Idol voters. The frission comes when Kate tries to replace Angie’s Red Bulls with organic soup and her paranoia that all these episodes of America’s Funniest Home Videos will turn her Baby Einstein into a Baby Paris Hilton.

I want to make it clear that Baby Mama is hilarious. I could quote its awesome one-liners out of context for diminishing returns. It’s also smart. The jokes are cribbed from the anxiety list of anyone who’s spent too much time reading the New York Times Style section. The people of Kate’s social echelon are competitive altruists one-upping each other with their adopted Katrina dogs and invisible carbon footprints. In contrast, Angie isn’t “more human” (what faux politician poppycock); she’s an alien. While Kate builds a tentative romance with Greg Kinnear as a former corporate lawyer turned smoothie-store owner, the heart is between Tina Fey and Amy Poehler, two funny women with years of SNL chemistry who we’re rooting will make things work from the moment “Endless Love” swells as Fey looks deep into Poehler’s eyes and croons, “I want to put my baby inside you.”

And to its credit, McCullers’ script isn’t patronizing or easy (okay, maybe just a little). When Holland Taylor, as Fey’s pragmatic bitch mom, asks if, when the nine months are up, the girls will keep in touch, everyone takes a nervous gulp—and so do we.