close
Inspirational story would have benefited from stronger editing 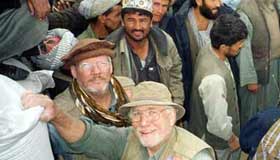 Three American men risk their lives to bring food and medicine to the impoverished in Adrian Belic's documentary. Their story is inspirational, but would benefit from closer examination and a steadier hand in the editing room. Still, plucky pic might draw a small crowd who will be moved by the men's acts, if not by the film framing of them.

"I don't know what I'm going to be when I grow up, but it's not a complacent, sit-on-my-ass kind of guy," says Ed Artis, whose white beard and heavily-stamped passport argue that he's already found his calling. For 30 years, Ed's traveled the world on a personal mission later shared with buddies Dr. Jim Laws and Walt Ratterman. They want to see every inch of the globe and save it, and their project shames all those Costa Rican ecotourists who plant a few trees and head to the bar. Toting hundreds of thousands of dollars in food and medicine, they've given aid directly to locals in places as diverse as Kenya, Nicaragua, Chechnya, Cuba, Cambodia, and Uganda. It's no accident that their itinerary sounds like the State Department's list of countries to avoid; once aid groups pull out of a country in fear of their safety, the men book a ticket. They were even in Afghanistan in October of 2001 (though they'd slated the trip before the war).

Documentarian Adrian Belic bills his attempt to keep up these guys — who call themselves Knightsbridge International — "Mother Teresa meets Indiana Jones." Arguably, they've done more good then the saintly nun, who we must be reminded, only ran hospices that offered the sick only beds to die in (no medicine). Plus, as Ed stresses, "We're not in the God business" — their gifts come solely from a sense of human duty. It's moving to watch the men cradle a hydrocephalic baby and soothe her tense Filipino mother with promises that they'll fly them to a hospital and cover all expenses. It’s tense seeing them slam stacks of hundred dollar bills before a trader who's promised them 6 tons of food, but no safe transport into Afghanistan. Still, the film lacks edge and complexity as Belic rarely clues us into what's happening, where, and why, stringing together clips of them rumbling though barren lands in trucks and handing out care packages. He's simply hitting the greatest hits of their trepidations travelogue. He knows enough to zoom in on the guns their escorts (sometimes US military) clench, but not enough to make us feel that we know these men — we don't even know how they afford the time and resources. Walt has one great bit where he shows Belic his survivalist stockpile of a full year's worth of toilet paper and dried food. It's a good thing he doesn't say exactly where he lives, because in the event of disaster, I'd head straight to his solar-powered rigged digs. We sense that he's the tactician, Jim is the heart, and Ed the mouth and motivator, but they speak mostly in platitudes and Belic doesn't dig deeper. Skimming and simplistic, the film can't be equivocated with Knightsbridge's brave generosity; it's exposure they deserve, but you walk away wishing the filmmaker had channeled the guts he showed in crossing dangerous borders with his subjects into asking them tough and insightful questions on thrill-seeking, altruism, and their constant threat to make their wives widows.