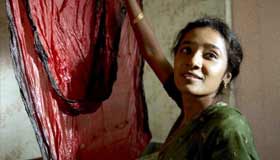 Based on a popular novel by Monica Ali, Brick Lane is a blandly earnest coming-of-age story about an immigrant woman from Bangladesh who reluctantly moves to London’s Brick Lane neighborhood with her pompous husband and ultimately finds herself. The movie’s theme is a modern variation of the feminist subject of Satyajit Ray’s masterful adaptation of Rabindranath Tagore’s novel The Home and the World, in which a woman protected by tradition tragically destroys her marriage when her liberal husband gives her freedom and she falls in love with a dashing revolutionary.

In Brick Lane, Nazneen (Tannishtha Chatterjee) jeopardizes her unhappy marriage when she falls for Karim (Christopher Simpson), a religious fundamentalist who becomes radicalized after the 9/11 terrorist attacks. Unlike in The Home and the World, though, the tone here is mildly self-righteous, with the idyllic spiritual bond between Nazneen and her sister back home treated with the candied simplicity of The Color Purple. Chatterjee gives a warm, supple performance despite the quaint direction by Sarah Gavron. Satish Kaushik isn’t so fortunate. As the boob husband, who becomes an endless target of derision, he is a walking caricature of self-interest. Brick Lane substitutes picturesque consciousness-raising for coherent drama.