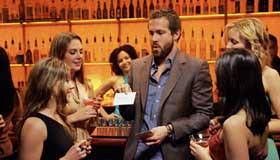 Middling romantic comedy about an anal-retentive list manager gone “chaotic” could have drowned in sap many times, but is religiously saved by good performances by Ryan Reynolds and Emily Mortimer. Studios aren’t betting high on this one; submitting it to strange releases in second and third cities, but there’s a good deal to like and eventually, box office will prove it’s worth putting money on.

When Frank’s wife Susan (Emily Mortimer) inadvertently sets the house clocks forward (instead of backward) to ensure Frank has extra time, Frank misses the ferry to his “big” time-efficiency speech, ironically making himself late. From there, he finds himself in situations that shake his wife’s confidence in him and in the process of proving his innocence to her, he finds skeletons in her closet.

Much like Lars and the Real Girl (both have Mortimer in common), Chaos Theory is a well-intentioned, off comedy with a strong regional feel. Use of colors in the film evoke the sense of a lived-in New England eclecticism and suggest shared histories and interesting “characters.”

Certain aspects of the film are a tad pat. Take for example, the Capra-style reunion that’s derailed because of a predictably forgotten bouquet of roses. Yet those moments are couched in a larger story that’s quite generously traditional and director Marcos Siego, whose history in television is somewhat visible here, creates many opportunities to celebrate the traditionalism without smothering the sentiment with saccharine. Some turns in direction are subtle and charmingly rendered and, most notably, paired very, very well with performances to occasionally memorable effect.