close
Lelouch re-energizes himself with this shot-in-secret production 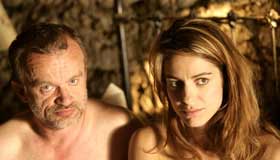 Claude Lelouch, who won the Palme d’Or in 1966 for his innovative classic Un homme et une femme, wrote and directed his new film in secret, giving the credit to Herve Picard (actually the name of a friend) to disguise his own role. Lelouch, with his 41st film in a career that has spanned 50 years, says he did this to avoid media distractions. “I wanted to do another film that amused me, essentially, without being subjected to the pressures of the market,” he says.

Crossed Tracks centers on Judith Ralitzer (Fanny Ardant), a femme fatale and author who is seeking characters for her next bestseller. As it happens, a serial killer (Dominique Pinon) has just escaped from a high-security prison. Meanwhile, Huguette (Audrey Dana), an airhead hairdresser in a top Paris salon, is going to change their destiny. With elements of road movie, thriller and comedy as well as other genres, Tracks possesses a freewheeling appeal. Lelouch clearly enjoyed the freedom of making the film with his own money, and the exercise may well have re-energized him after the debacle of his previous outing with Les Parisiens, supposedly part of a trilogy that flopped and was curtailed with considerable losses.