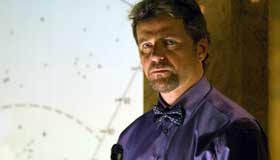 Melodrama based on the true and tragic story of a budding astrophysicist makes as strong of an effort to succeed as its protagonist, but suffers similar failings. Chinese opera director Shi-Zheng Chen waxes poetic in some places, showing vision and finesse, but lapses in Billy Shebar’s script (the meager explanation of dark matter, for example) are hard to recover from. Still, could be a strong think piece in the arthouse for, at the least, its strangely incisive commentary on politics in academia.

Dark Matter begins with some very promising material. Liu Xing (Ye Liu) is recruited from China to work on a PhD in astrophysics. We frequently see his diligent family in China, to whom he sends letters and money. His family’s tirelessness is mirrored in the work of their son, who studies to a health-endangering degree. Professor Reiser (Aidan Quinn) immediately takes Liu under his wing, signaling—if for a moment—that his arrogance and ambition might not overwhelm Liu’s drive. Ultimately, Liu conceives of a theory for dark matter that would oust the otherwise accepted theory conceived of by Reiser. Threatened by possible dethroning, Reiser publicly disapproves of Liu’s dissertation idea, thus forcing the student to extricate himself from academia and begin selling makeup door to door to make a living. All the while, Sinophile Joanna Silver (Meryl Streep) is supporting the Chinese students in the school and offering them social activities, in exchange for access to their Chinese culture. Longing for cultures they don’t—or can’t—call “home,” the students and Joanna share a commonality that’s hard to place but engagingly played by Streep and Ye in particular.

Sadly, the third act features some near aggressive backsliding into tragedy and melodrama, and this genre shift throws the film pretty far out of balance. It’s a shame because direction in the first two acts is lyrical and often represents the sort of divine/madman spark that seems at the heart of most great ideas. This conflation of genius and madness is occasionally supported by near poetic entrees into nature imagery. As the film is broken into six chapters (one for each element), the genius/madness of Liu and the sources of his inspiration appear altogether “of the earth.” Though the definition of dark matter isn’t as clearly delineated as it should be, the obscurity of the theory is not that damaging to the film overall. What wounds the film most is this last-minute change of genre. While imperfect, the high caliber of acting as well as these lucid moments in the earlier part of the film are strong and memorable highlights with which to leave the theatre.