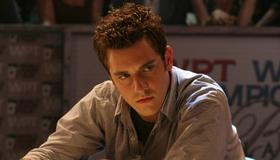 A wily veteran who hasn’t played a hand in 20 years takes a promising young player under his wing, hoping to cash in on a big televised game. On the heels of other recent poker-themed flops like Lucky You and The Grand, it doesn’t look like the losing streak is set to change with this numbingly derivative and bland drama. With struggling studio MGM giving this just a token theatrical release on a limited number of screens, expect a losing hand on the way to Wal-Mart.

In 1986, the game was pool instead of poker, but the plot was identical in The Color of Money. A retired vet who trains a young hotshot sees his own interest in the game renewed; this leads to a showdown between two generations. Only difference is that movie won Paul Newman an Oscar, co-starred Tom Cruise and was directed by Martin Scorsese. This one has Burt Reynolds with a bad toupee, a kid straight off the CW and was directed by Gil Cates Jr.! Times change. Plots don’t.

Alex Stillman (Bret Harrison) is a college kid who shows a real talent for poker, and legendary player Tommy Vinson (Reynolds) spots that talent. Now retired for 20 years, Tommy sees a younger version of himself in Alex and offers to train him for some major tournaments including one in New Orleans. (On a side note: Deal was shot completely in New Orleans, the first independent to do so after Hurricane Katrina devastated the city.) Although their collaboration gets off to a promising start, it evaporates when Tommy pays a prostitute (Shannon Elizabeth) to spend the night with unknowing Alex. The two are eventually reunited in a televised showdown where Tommy, who’s trying for a comeback, and Alex, as the youngest at the table, wind up challenging each other for the $8-million purse.

Thoroughly predictable in every way including an obvious ending that tries unsuccessfully to bluff the audience, Deal feels fake and trite. There is no gambling movie cliché left unturned and the dialogue is so ludicrous you wonder how the cast manages to play it all with a poker face. Reynolds sleepwalks through his part to the point that it looks like he sent in his wax figure from Madame Tussaud’s to be his stand-in. Harrison is wildly unconvincing as a guy who could emerge from nowhere to the top of the game. The rest of the cast, including small bits from Charles Durning and Jennifer Tilly, is wasted—along with 86 minutes of your life should you decide to see this thing.