close
Deception suffers from a preposterous plot and poor execution 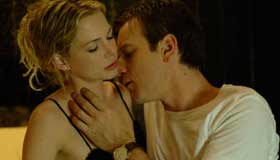 In 2003, Ewan McGregor made a fizzy romantic comedy in the Pillow Talk mold titled Down With Love. Those three words apply to Deception, an overly deliberate, quite preposterous thriller in which he plays a lonely accounting drone snared in a honey trap. True romance undercuts the mystery and misdirection in a plot marked by steamy sex. Love can make you do stupid things—even more than lust, apparently—and it definitely denudes this movie of its smarts. Despite general implausibility and lapses in execution, an enticing scenario, three alluring leads and sleek production values could translate into solid opening-weekend business.

The generic title is strike one. McGregor’s character, Certified Public Wallflower Jonathan McQuarry, is the source of the film’s major credibility deficit. When the camera brushes over his meticulously parted hair in the first scene, it’s obvious the character is over-determined and that the books have been cooked. Late one night at the Manhattan offices of a company whose financial records Jonathan is auditing, high-flying attorney Wyatt Bose (Hugh Jackman) walks in. Wyatt sparks a joint in the conference room (strike three) and mousy Jonathan, who makes Leopold Bloom of The Producers look like a gigolo, has a new pal. Cool corporate turd befriends nerd.

Soon Wyatt introduces Jonathan to a sex club whose members hook-up for hot, anonymous sex in swanky Gotham hotels. The idea being, busy capitalist tools get horny too and don’t have time to socialize properly. They need “intimacy without intricacy.” All it takes is a phone call: “Are you free tonight?” Jonathan dives in, tripping the light fantastic with a series of career women. Then, about a month into his walk on the wild side, he encounters a blond gamine known only as S (Michelle Williams), whom he first glimpsed on the subway the night he met Wyatt. They connect emotionally, chowing down on cheeseburgers instead of one another. After a second date—on a rainy night in Chinatown—things take a criminally nefarious turn involving homicide and larcenous wire transfers. Without giving it away, their romantic interlude is too convincing on one level and insufficiently convincing on another to justify what follows.

The actors bear some responsibility. McGregor presses down hard on the dweeb pedal and Jackman exhibits bombast more appropriate to shiny stage musicals. Due in no small measure to Williams’ kewpie doll quality, “S” stands for soppy. The most believable character is Lisa Gay Hamilton’s NYPD detective. Charlotte Rampling’s cameo as a cougar extraordinaire is disturbing for Oedipal reasons (“I’m a sucker for bashful boys”) and because the well-preserved actress continues to gravitate toward slatternly or at least oversexed senior citizens. Granted, roles for older women aren’t plentiful, but how about trying to land a part as the Euro equivalent of Dakota Fanning’s granny in a nice family film?

Mark Live Free or Die Hard Bomback’s dialogue sounds increasingly hackneyed in the rushed latter third. Jonathan doesn’t have much time to display his problem-solving prowess and the doppelganger theme is insufficiently explored. Reading between the lines or looking beneath the numbers isn’t necessary since Bomback spells most everything out and director Marcel Langenegger telegraphs the rest. Eminent production designer Patrizia von Brandenstein and cinematographer Dante Spinotti can take credit for the film’s slick veneer, but even their handiwork gets repetitive.

Love hurts and so does Deception . If the voice on the other end of your cell phone asks, “Are you free tonight—to see the new Ewan McGregor movie?” say no.