close
Latest Apatow-produced comedy should be easy to forget 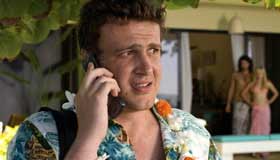 Forgetting this average comedy won’t take a trip to Hawaii. Peter (Jason Segel) heads to an island resort after his ex Sarah (Kristen Bell) breaks his heart. Though he meets Mila Kunis’ pretty hotel clerk, the only person auds will want to cling to is sleazy English comic Russell Brand playing Sarah’s new boyfriend, who puts more effort into being funny that the combined total of producer Judd Apatow’s post- Superbad factory films.

The usual slob rom com has the lug winning the girl beyond all sense of sanity. Here he loses her, and with good reason. It’s not his daily nipple dance in the mirror or his habit of wolfing down cereal from a dog bowl. It’s his petrifaction in half-manhood, the way station of the depressed and fearful who are dimly aware that life could be better, but are too timid to try harder. The reviled Sarah Marshall has one good scene where she gets to unload on ex-boyfriend Peter why she dumped his sweatpants-wearing, couch-glued ass (which we get to see often in its full glory). She’s an actress on a titillating forensic drama that requires her to purse her lips thoughtfully while mulling over severed penises with William Baldwin. Peter does the “music”—the atonal chords that lend that je ne sais castration. After five and a half years of public togetherness capped off by Billy Bush saluting their love with a montage, she’s left him for the world’s coolest douche bag, Aldous Snow (Russell Brand, owning the film), the longhaired, leather-clad frontman of a pretentious British rock band named Infinite Sorrow. Aldous might pretend he’s saving the planet by shooting a video where he makes out with nuns and Orthodox Jews, but he’s also awesomely cocky, really, really great in bed and looks manly in a sarong.

The problem isn’t that we’re supposed to hate Sarah, it’s that we can’t because she’s too damned boring. Bell has glossy lips, blonde hair and zero personality—she’s an amalgamated dream girl as flat as a magazine spread. Heather Mills we can loathe; Sarah Marshall’s a big fat yawn. Peter tries bedding other women, but both parties regret it in the morning—the wet spots on the sheets are from his midnight tears. When Peter tries to escape his misery with a Hawaiian vacation only to run into Sarah and Aldous at the same resort, he blubbers like a baby, but she’s as petty as a splinter. She might even care about his misery—at least a little. Hospitality concierge Rachel (Mila Kunis, sweet, pretty, interchangeable) dotes on Peter, but that could just be her job. Of course it isn’t, but lets pretend, shall we?

Segal wrote the script and knows that his character’s best lines aren’t jokes, they’re great, tearing, bawling sequences where he weeps during Project Runway and drowns his sorrows in cocktails decorated with erotically positioned fruit. Segal is lumpen, glum and prone to tantrums. He’s funny when lashing out at kindness or crumpling under self-pity, his vulnerability extended to several shots of his limp manhood hanging benignly when he’s caught off guard while dressing. For, ahem, harder laughs, Segal and director Nicholas Stoller have fallen back on producer Judd Apatow’s stable—the closest thing in today’s film to the studio system. Jonah Hill is trotted out as hotel worker who’s totally hot for Aldous’ jock. Paul Rudd roams around as a surfer named Chuck, or “Kulu” in Hawaiian (which means “Chuck”), who has the pothazed memory of a goldfish and one of the film’s loudest guffaws when he slaps Peter on the back and advises, “When life gives you lemons, just say ‘F--k the lemons’ and bail.” But the whole film feels like Apatow and clan are still on their own vacation after last summer’s one-two punch. Their comedies have the singular disadvantage of high expectations—they can’t just put Will Ferrell in daisy dukes, they’ve got to enlighten us about the modern man while pushing taste 2 the xtreme. And while this mediocre flick is worthy of a cheap one-night fling (or matinee), don’t introduce it to the folks unless you’re comfortable that they won’t be uncomfortable at all.