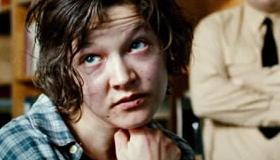 Despite some predictably Teutonic heavy-handedness, writer/director Chris Kraus forges a powerful emotional tandem in Four Minutes, the story of an unlikely relationship between an emotionally repressed piano teacher and her brilliant, violent student. Despite following certain preordained genre beats, the film’s psychological insights and powerhouse performances combine to form a consistently engaging narrative from which mini-distributor Autobahn should be able to generate some healthy art house legs.

Since World War II, Traude Krüger (Monica Bleibtreu) has taught piano to inmates at the Luckau women’s prison, but her latest pupil proves to be both her most gifted and her most incorrigible. Violent, self-destructive and unpredictably volatile, convicted murderer Jenny von Loeben also has a gift for the keyboard that cannot be taught. And though she prefers what her classically trained teacher denigrates as “negro music,” the two nonetheless begin to find the necessary common ground to help heal the scars of their respective pasts.

In the face of repeated opposition and a steady stream of obstacles generated by prison officials, each woman’s secrets are methodically and carefully revealed, making it immutably clear that neither can trump her past demons without the help of the other. Some of the revelations are predictable, others not so much. But Kraus’ execution is generally both stylish and workmanlike, detracting from his superb lead actresses only on a few negligible occasions. Whatever the film’s niggling faults, however, they are ultimately of little consequence in light of what ranks as one of the best movie finales in recent memory.

From a purely structural standpoint, Four Minutes feels a lot like a darker, heavier female version of Good Will Hunting, with music substituted for math. But Herzsprung and Bleibtreu, who has won several Best Actress awards for her performance, invest their characters with such passion and conviction that the vestiges of formula soon start to melt away. Even after one has surmised precisely where the film is going, simply watching these two superb performers exercise their talents is more than enough to sustain interest.

At the same time, Four Minutes represents a bittersweet moment for foreign-language films — as much as Autobahn is to be praised for its acquisition, without which American audiences might never have found such a worthy film — the likelihood that Four Minutes would have been more widely released by a Miramax or Sony Pictures Classics just ten years ago underscores the crisis facing foreign language films in the U.S. at this point in time.

This is all the more reason to support both the movie and its distributor.