Glass: A Portrait of Philip in Twelve Parts 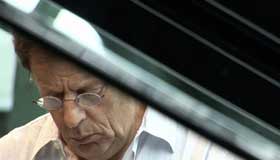 Once considered avant garde, the music of Philip Glass--both roundly lauded and panned (he claims it’s endured a very strong “hate faction”) has become so mainstream that he’s been caricatured on The Simpsons, lampooned by a New Yorker cartoon and become the punchline of a “knock knock” joke (Knock Knock. “Who’s there?” Knock Knock. “Who’s there?” Knock Knock. “Who’s there?” “Philip Glass”). Synonymous with symphonic repetition, minimalism and monotony, Glass’s numerous soundtracks, operas and symphonies have been labeled alternately hypnotic and boring. The same could be said for the bio-doc Glass: A Portrait of Philip in Twelve Parts. Given the global fan base of Glass’s oeuvre, film should do well on the big screen here and internationally, while later striking DVD gold.

Director Scott Hicks’s first film, Shine, about another piano-playing icon, Australian David Helfgott (crushingly portrayed by the gifted Geoffrey Rush), landed him an offer from Glass’s manager in 2005 that Hicks couldn’t refuse: 18 months of unprecedented access to the composer’s family life, spiritual teachers, long-term collaborators, along with entrée into the artist’s creative process. Glass unfurls like the many Tibetan Tankas floating on the walls of the subject’s home: 12 vignettes track the musical genius as he avidly practices his creative endeavor, friendship, collaboration, spiritual pursuits and—with noticeably less zeal—fatherhood and partnership with his fourth wife, the much-younger Holly Critchlow.

The title cards--like life--oscillate between the quotidian: “The Office,” “Downtown,” “Snapshots,” to the lyrical: “Summer in Nova Scotia,” “Door into Another World,” “The Spirit Within,” “The Underlying Passion.” In one segment, Glass visits his long-term friend Chuck Close in the artist’s studio (in the background, covering a large section of the floor, hovers Close’s photo-realist portrait of Glass as a young man, “dendritic curls” and all), and we enjoy the easy reminiscing that a 40-year friendship induces. In another segment, Glass’s sister and brother amusingly reveal that they were the ones who learned piano as children, not Philip. Family members, friends and collaborators converge at the Nova Scotia summer home, where Glass makes vegetarian pizza from scratch and simultaneously describes his creative process. “It’s like a river underground,” he explains. “You can’t see it, but you know it’s always there.”

Hick’s interviews film directors who have collaborated with Glass, and they offer their insights into the philosophical nature of his music. Errol Morris suggests that “Philip does existential dread better than anyone.” The ever-articulate Godfrey Reggio waxes rapturous about Glass’s synaesthetic soundtracks, which he feels permit viewers to see music and hear images. “He’s created a musical language that is the acoustic door to the unknown  like an ever-ascending score that never reached to the heavens.” And certainly, one simply cannot imagine the Qatsi trilogy without Glass’s integrally collaborative score.

But Hicks never really gets to the heart of his subject or beneath the apparent perfection of the Glass household (for all the frolicking children).

With all the 70-year-old’s solitary peripatetic wanderings (Glass visits three continents) and mystical soul searching (we meet three of his spiritual advisors), I kept thinking, “Who’s minding the farm back home?” In the most intimate and raw moment of the film, Holly, out of what one imagines can only be sheer frustration, bordering on despair, declares that during the past four years, she’s been a very unhappy woman. So, we end up learning more about Philip Glass than either he, his manager or director Hicks probably ever imagined.

Bio-docs cannot hope to solve every riddle that comprises the psyche of an individual, especially one as complex as Philip Glass; but Glass acts as a tuning fork that calibrates the significance of a compelling 20th century composer who is still going strong into the 21st.