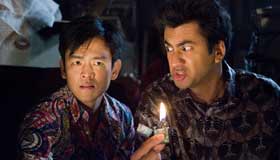 Anyone familiar with studio creative accounting practices knows that in Hollywood the rules of mathematics simply don’t apply. So it shouldn’t come as any surprise that the makers of Harold & Kumar Escape From Guantanamo Bay have actually figured out how to subdivide the lowest common denominator so as to achieve an even lower common denominator. Inconceivable as it may appear, this dreadful sequel to the surprise 2004 comedy hit is actually more vulgar, inane, preposterous and stupid than its predecessor—qualities which will undoubtedly enthrall the franchise’s core audience of smug, pot-smoking frat boys while quite rightly appalling anyone with half a brain or an ounce of decorum.

Picking up literally hours after the previous film, the new Harold & Kumar begins with the most crass of scatological jokes and takes a precipitous dive downhill from there. As per formula, the film concerns yet another nightmare odyssey for the dope-toking duo (John Cho and Kal Penn) whose intended flight to Mary Jane heaven in Amsterdam is disrupted after Kumar is caught trying to light a high-tech smokeless bong in the airplane lavatory. In the eyes and ears of on-flight air marshals, “bong” becomes “bomb,” and the two soon find themselves shipped off to Guantanamo courtesy of a crazy racist Homeland Security official (Rob Corddry) who’s convinced that they are key to a new alliance between North Korea and al-Qaeda. Despite the intentional provocation of the title, time actually spent at Guantanamo Bay and escaping therefrom occupies barely five minutes of screen time—just long enough to inflict a vile oral sex joke—after which the boys hitch a ride to Miami with some Cuban refugees. From there begins an odyssey to clear their names that will bring them into contact with all manner of depravity, far-fetched stupidity and lasciviousness—full-frontal female (and male) nudity, inbred rednecks, scary black people, crazy Klansmen, their unstable ol’ pal Neil Patrick Harris and, of course, Kumar’s one true love (Danneel Harris)—who’s about to marry the jerk of all jerks (because anyone who doesn’t smoke weed simply cannot be trusted). There’s also a climactic encounter with a famous Texan that gives new meaning to the term “bush league.”

The idea here was seemingly to provide the first film’s fans with a satisfying sequel that was also laced with a bit more meaning (i.e. salient commentary on terrorism, domestic security and racial stereotyping), which is a little like spritzing perfume into the sewer—if anything, it just fouls the scent of the perfume.

All of this, of course, is clearly intentional on the part of writer/directors Jon Hurwitz and Hayden Schlossberg (writers of the previous film) who clearly wanted to reconceptualize Cheech & Chong for a new generation. What they probably didn’t foresee was that they would actually surpass their idols by demonstrating even less talent and making even worse films. These are strictly movies by stoners, about stoners and for stoners. If they offer any service to humanity, it will be to help authorities corral the dregs of society as they congregate in theatres on opening weekend and ship the lot of them to Guantanamo Bay.