close
Jack and Jill proves to be painful cinematic experience

Jack and Jill vs. the World 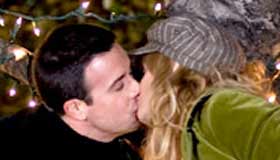 Before diving into this pan of director Vanessa Parise’s clichéd, unfunny, forced and altogether excruciating rip-off of Love Story and Sweet November, drift over to the film’s trailer page on apple.com. There you won’t see the usual paragraph-long synopsis, consisting of peppy, promotional metadata. This film’s trailer page includes a vomitous amount of exaggerated and narcissistic praise so over-the-top (and peppered with typos), you’d think the film just cured cystic fibrosis. Then again, anything less would be a disservice to a filmmaker like Parise, whose movies, “by design, are more than pure escapist entertainment.” Here we learn that Parise’s films, including this one, are “life-affirming, multidimensional and cognizant of the world’s foibles.”

If only Parise were cognizant of the foibles in this awful film, in which Freddie Prinze Jr. miraculously extends his career for another 89 minutes by playing Jack, a fussy, set-in-his-ways, job-focused bachelor who falls for free-spirited Jill (Taryn Manning) who likes wearing pink and giving an enthusiastic thumbs up when something pleases her. Considering the talent assembled, the only audience draw here is the prospect of getting out of the rain.

Parise also wrote the movie, which—in this case—means cataloguing and regurgitating the broadest and most overused rom-com chestnuts. Once Jill, newly arrived in Manhattan and navigating the city using a subway map, storms into Jack’s life by interrupting his rooftop smoke break, every eventual character turn becomes instantly obvious. Jack, you see, likes his designer, corporate coffee and his expensive BMW. Jill, you see, prefers the mom-and-pop coffee joint and the cherry-red classic car Jack used to drive, before he started believing that “real happiness is bad for business.” Jack has been larded with such manufactured dourness that he initially refuses to climb a tree with Jill because “fun is overrated.” That Jack! How can such a large stick find its way up one man’s behind?

Still, Jill is determined to get her ad-executive boyfriend to lighten up. At the top of her lungs, she calls for them to “start a revolution,” which leads to half-baked nonsense about writing a manifesto of rules to live by (example: “Rule #1: Be Honest”). It’s fair to guess that Parise imagines audiences, their joyful lives newly affirmed, exiting the theatre, hitting the mom-and-pop coffee joint and writing their own manifesto, but that’s unlikely. Nobody will be exiting theatres showing this movie because nobody will be entering theatres showing this movie.

There’s a rule in film that no character is allowed to cough unless they eventually die. And since, in this film, rules are made to be slavishly adhered to, Jill starts not only coughing, but also disappearing for days, which worries Jack to no end. As it turns out, Jill has broken Rule #1 of their ridiculous manifesto by not revealing that she suffers from cystic fibrosis, an admission that launches this piffle way outside its comfort zone. However, the writer of the movie’s apple.com trailer page disagrees, arguing that Parise “made the courageous decision to identify and advocate a little-discussed disease that has no cure in sight (though small advances against CF are sporadically forthcoming).” There really is a certain arrogance in assuming that we’re going to be moved by Jill’s affliction, as if the audience has an easily triggered emotion reflex that works whether we care for the characters or not. It’s equally galling that we’re expected to think better of the movie because it drops references to Ibsen, The History of Russia and the Declaration of Independence (which Jack uses to argue that “you can’t pursue happiness.”). But what else can we expect from Parise who, referring back to apple.com, “graduated magna cum laude in biology from Harvard and was accepted into Harvard Medical School (as well as Stanford, Yale and Columbia, to name a few).” The director also appears in the movie, as Jill’s friend Lucy, who dresses depending on her mood, as opposed to Jack, who has a closet full of the same white dress shirts and dark suits. Since, according to apple.com (one more time, it’s just too good), “acting as well as writing and directing have brought Parise out of her head and into her heart,” at one point, Lucy gets onstage and sings about a corporate robot who watches too much TV, eats too much sugar and believes that “advertisements lead me to the promised land.” Where that forced bit of tuneful, social relevance came from is anyone’s guess, along with the rest of the terrible songs featuring trite, on-the-nose lyrics like “time can take its toll on the best of us.”

Everything in the movie, including its clumsy title, feels artificial. It almost neutralizes the charms of a well-worn soul like Robert Forster (still cool after all these years) who plays Jack’s father and provides the unnecessary voiceover narration. As we’ve come to expect, Prinze Jr. gives off no heat. He’s not funny enough to sell the comedy, not accomplished enough to sell the drama. Manning has a thankless role, wide in its breadth, but begging disbelief (is Jill really an “island of heart surrounded by the Sea of Intuition”?). Casting aspersions on the performers, though, is unfair. Blame rests with co-writer, director, producer and co-star Parise. If you want to make a movie about a person with cystic fibrosis, then make a movie about a person with cystic fibrosis. This creation, on the other hand, is the Mad Libs version of a romantic comedy with a horrible disease thrown in.