close
Bride should appeal to fans of gay-themed films 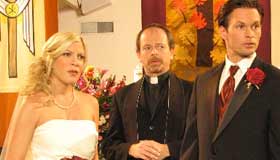 Matt (Philip Karner), an openly gay man, left his hometown and his best friend/first fling behind for the big city some years ago. Now a successful editor of a gay magazine, he receives an invitation to said fling’s wedding—to a woman (Tori Spelling), no less. Matt’s perfectly reasonable curiosity, rekindled flames and a good deal of guilt about leaving his old boyfriend behind gets the better him and he heads home for the wedding. Director C. Jay Cox is an Outfest favorite (see: Latter Days, 2003) and the screenwriter of Reese Witherspoon’s hit Sweet Home Alabama. The same charm is evident here, though Tori Spelling is no Reese Witherspoon (and is trying semi-successfully to hide her pregnancy), and while all the demonstrably gay content is never particularly raunchy (no full fontal), it comes off as somewhat self-aware; the cause of the narrative rather than it’s result. An artifact, perhaps, of Cox’s script and the less than polished performances by leads Karner and James O’Shea. Fans of the genre, Ms. Spelling (who are likely the same people) and perhaps TV’s Will & Grace (who are likely the same people) will be inclined to walk this bride down the aisle.

That said, there is a scene in Kiss the Bride where Matt poses as a stripper to solicit some untoward behavior from Alex (Spelling) at her bachelorette party. It is the most uncomfortable striptease captured on film since Sandra Oh took it off in Dancing at the Blue Iguana. On the other hand, leads Kramer and O’Shea have a couple of naked, but not particularly naughty, moments during which they appear perfectly comfortable. Karner is openly gay; O’Shea may just be a better actor than we’ve given him credit for.

In an interesting twist, when Matt and Ryan (O’Shea) reunite under the gaze of fiancée Alex (who has discerned something special about their relationship), what he finds is a perfectly straight man whom he used to have sex with in his teens. What he doesn’t find is a bitter man who regrets having been left in the town where he grew up instead of going off to the city with his boyfriend. These are incredibly sophisticated notions that one would not find in a similarly composed romantic comedy featuring straight people. Never.

Wonder why that is?