close
Leatherheads proves to be a solid throwback to screwball comedies 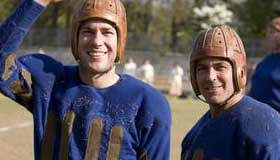 Period comedy set against the beginnings of pro football in 1925 finds director/star George Clooney playing a quarterback trying to win the attention of fans for the nascent league and Renee Zellweger. Zellwegger plays a pretty and determined newspaper reporter who is investigating his star player and romantic rival—in more ways than one. Handsomely crafted, ingeniously plotted and expertly directed, Clooney delivers a purebred, light, adult entertainment in the spirit of ’30s and ’40s screwball comedies and even The Sting. Business should be brisk because of not only Clooney’s female fans wanting to see him in a romantic comedy, but also guys who should eat up the primitive football antics on and off the field.

The script for Leatherheads, which has been floating around for 17 years, was developed by Duncan Brantley and Rick Reilly—two Sports Illustrated scribes fascinated by the birth of pro football. Taking some facts about football’s early days and players and wrapping it up in a romantic comedy, the debuting screenwriters have come up with a winning story that stands out as a smart and stylish tale.

Leatherheads prides itself on witty repartee rather than the over-the-top gross-out situations like the sort that usually pop up in today’s sports comedies. Right from the opening use of the old Universal logo, Clooney plops us smack into the middle of the roaring ’20s, where he’s Dodge Connolly—a quarterback and born leader who is trying to transition fans from far more popular college games into the world of pro ball by pulling together a ragtag team of talented but eccentric recruits. Unfortunately, the loss of a key sponsor forces him to enlist a star college athlete and WWI hero named Carter Rutherford ( The Office ’s John Krasinski) in order to have any hope of packing the stands. Thinking the golden boy’s story is just too perfect to be believable, Tribune reporter Lexie Littleton (Zellweger) digs up the dirt even as both teammates battle for her affection off the field. Complications arise that threaten not only Dodge’s football franchise, but also the reputation of his number-one player. Manipulation by Carter’s slick, money-grubbing manager (Jonathan Pryce in a choice performance) doesn’t help the situation, but Dodge has a few choice plays left in his game plan that just might save the day.

Clooney shows a sure hand behind and in front of the camera, oozing movie star appeal and knowing how to let Brantley and Reilly’s smart dialogue breathe. Recalling the kind of film Howard Hawks would have been comfortable making, the director demonstrates a sure-fire approach to the material which has lots of snappy rat-a-tat-tat repartee straight out of golden-era classics like The Front Page and The Philadelphia Story. Zellweger is perfect for this stuff and looks great in Louise Frogley’s period costumes. Krasinski and Pryce have great moments, along with fine support from Jack Thompson as a hard-boiled editor and Peter Gerety as the football commissioner.

Without anything else on its mind but to entertain, Leatherheads throws the equivalent of a cinematic touchdown.