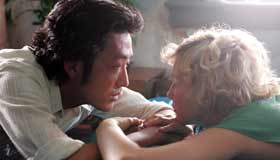 Vera Farmiga is again luminal and engrossing in Gina Kim’s Never Forever. A subtle exploration of the levels of alienation and sacrifice that plague both marriages and interracial relations, film has some incredibly beautiful moments, but is sometimes overwhelmed by solid-but-overused score by Michael Nyman. Though the film could reach a larger audience with a savvy marketing mechanism, may have trouble with auds outside of the arthouse.

Sophie (Farmiga) is the white wife of affluent Korean attorney Andrew (David McInnis). We meet the couple on the day of Andrew’s father’s funeral. Afterwards, Andrew grows despondent and repeatedly attempts to take his own life. As the couple struggles with infertility, Sophie’s only power in stopping her husband’s suicidal tendencies is to find a way to conceive which, with Andrew’s sperm, is a nearly impossible feat. In fear for what her husband might do, she finds a Korean man who resembles Andrew and propositions him with “a job” for which she’ll pay and they’ll both keep secret. The reward for impregnating her is handsome, and Jihah (Jung-Woo Ha) needs the money, but along the way the two find themselves with similar senses of estrangement. Far from his home in Korea, Jihah is not given many opportunities and, diligent as he is, few reach out to help him without a green card. In part due to a language barrier, they speak little, and their congress is at first demoralizing and almost painful to watch. What’s particularly compelling about the transition from businesslike exchange to fully-fledged affair is that it is all as underplayed as the rejections the two of them suffer from those whom they need most. A particularly impressive scene on the stairs of Sophie’s home will last in memory for some time.

Direction by Gina Kim is often impressive and subtle. Frequently she frames Farmiga in the bottom of frame, obscured completely but for her eyes, and the sense of solitude that seems to come from this union of actress and director is quite noteworthy. The only detrimental aspect appears in the overuse of Michael Nyman’s genuinely magnificent score. As usual, the music is beautiful, but it collides with the film’s subtleties and so stands out, making it seem less a part of the film and more like an obstacle in the way of our viewing. Ultimately, though, Never Forever is a beautiful and insightful picture.