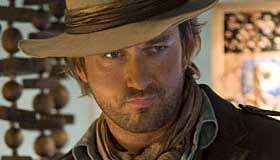 Nim’s Island puts a kid spin on Romancing the Stone and casts a former child star (turned two-time Oscar winner) with her 2008 tween counterpart. This story of a young girl and a flaky adventure novelist who come together to help save the remote island she inhabits should please the family crowd at which it is squarely aimed. With a nice teaming of Jodie Foster and Abigail Breslin, an amusing turn by 300 ’s Gerard Butler, plus bright cinematography and top production values, this scenic adventure/comedy delivers exactly what it promises—from broad slapstick to exciting action that stops short of becoming too intense for its intended audience. The latest kid-lit adaptation from family friendly Walden Media should have box office humming—at least until their summer biggie The Chronicles of Narnia: Prince Caspian pushes it out of theatres next month.

Breslin plays Nim, a perky, self-sufficient girl who lives on a remote island populated only by her scientist father (Butler) and her non-human companions, specifically a seal, a lizard and a pelican who all seem to understand English even better than Lassie. She is, as she says, “island schooled,” but really seems more interested in reading the latest books (shipped in from the mainland) about her hero, Alex Rover, a daring adventurer in the Indiana Jones mold who turns up throughout the film in the form of Butler (again) to help out Nim and the neurotic author who created him.

After her dad goes missing at sea, Nim’s e-mail correspondences take on greater urgency and the author discovers her number-one fan is a little girl left alone on a mysterious island. Summoning all the courage of the man to whom she gave her own name, Foster’s Alexandra Rover (a certified obsessive/compulsive agoraphobic who never leaves her city apartment) somehow manages to travel by plane, ship and single-person rowboat—in a driving storm, no less—to eventually meet Nim and help her to become, as the movie’s tag line suggests, “the hero in her own story”.

Despite some credibility-defying events, Nim’s is an island of grand family entertainment loaded with generous amounts of comedy and adventure. It’s nice to see Foster going for laughs as a wack job of an author who fills her novels with derring-do but can’t deal with the real world herself. In the kind of role Foster would have played 35 years ago, Breslin is a real charmer—easily handling both comedic and dramatic scenes like a pro. One sequence in which she uses her local zoo to drive visiting passengers from a tourist ship off the island will have the kids howling.

After Alvin and the Chipmunks and the current Horton Hears a Who!, Fox seems to be giving Disney a run from their money in the family genre, and Nim’s Island ought to continue their lucky streak at the box office.