close
Grid makes for an absorbing doc about war veterans 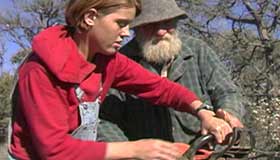 Brother-and-sister co-directors Jeremy and Randy Stulberg pull a clever bait-and-switch in the opening moments of their absorbing documentary about a makeshift society of war veterans, runaways and the mentally ill who live in a godforsaken 15-square-mile chunk of New Mexico desert. Playing directly to our preconceptions, they begin by introducing us to Dreadie Jeff, a scary-looking burnout wearing a shirt with the slogan “If you can read this, the bitch fell off.” Rifle barrel warm from target practice, Dreadie Jeff gleefully notes, “If you tried to do this in Brooklyn, yo, SWAT would be right around the corner.” But the Stulbergs have more on their minds than a 70-minute parade of homeless anarchists. Instead, they begin uncovering intriguing layers of deeply held (if a bit twisted) patriotism and a romantic (if a bit twisted) desire to escape modern society. Their nonjudgmental look at the 400 inhabitants of the Mesa, along with an overview of how they survive with no electricity and little water, makes for one of the more interesting documentaries so far this year. The film is not destined for box office gold, but will certainly make some coin on cable and DVD.

Encamped about 25 miles from the nearest town and rejecting any government interference, Mesa dwellers live in junkyard-quality mobile homes and shelters that give off a creepy, post-apocalyptic vibe. But although they’ve abandoned society, that doesn’t mean they live without the rules of order that make society livable. The two primary laws of the Mesa are “don’t steal from your neighbor” and “don’t shoot your neighbor.” There’s no currency, although marijuana (which “relaxes everyone”) is the closest approximation. With water scarce, they bathe in the Rio Grande, a five-mile hike from camp, and find clever ways of capturing falling rain and melting snow. No matter how hard they try, however, they can’t completely escape civilization. They grow some of their own food, but get most from a food bank, which requires a member to drive to a rendezvous with the food-bank truck.

The Stulbergs mix the mechanics of this DIY society with portraits of about a dozen inhabitants. Many are troubled, disillusioned or ill Gulf War veterans. Gene left his wife in Connecticut and now lives on the Mesa with his young, home-schooled children (“The Mesa’s awesome!” says one). There are many pre-teen and teenage children on the Mesa, the only aspect of the film that’s truly disturbing. Stan is a grizzled Mesa pig farmer who takes in runaways, including 17-year old Virginia, whose mother was a heroin addict and prostitute. The doc’s only dramatic storyline concerns a group of runaways dubbed the Nowhere Kids, one of whom is suspected of stealing vegetables. Refusing to get the police involved, the inhabitants try the kids in front of a council of elders. Eventually, the women of the town, including former psychiatric nurse Mama Phyllis, are sent to throw the kids out.

It may be tempting to penalize the film for the anarchic, sometimes downright stupid behavior of its characters, but that’s not fair: It’s true that young teenagers drive trucks, the adults walk around naked or get drunk and set fire to cars, and some are ill and require care. But in their minds, there’s a nobility to life on the Mesa and, despite our reservations, it becomes increasingly harder to disagree with them (especially since they’re armed). Maine is a Gulf War veteran whose body is riddled with cancer. He goes into town for blood tests, but refuses chemo. He considers living on the Mesa an expression of his patriotism, the idea that America is the land of the free, and the Mesa, where “We don’t dial 911, we dial .357,” is about as free as you can get. “Other people might see it as a hardship,” says one resident. “We see it as Disneyland.” Most others will prefer to see it from the comfort of a plush chair. Although, when the credits roll, we may not like these societal dropouts or their society, we may almost sympathize with why they live in it.