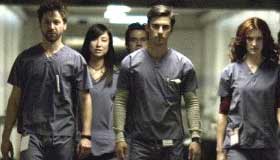 Existing somewhere in a world between Flatliners, Saw and Last Tango in Paris, this oversexed, over the top, underwritten medical horror flick won’t come anywhere near the success of those films. Despite premise about a group of brilliant interns who kill people for kicks (that might have sounded good as a pitch), film only comes off as repulsive—and in the case of this squeamish reviewer—unwatchable. MGM, smelling a stinker, dumped the picture with little advertising support into 46 theatres over the weekend, earning a scant $55,000 and just under $1,200 a print. Still, its theatrical flatline will probably pave the way for slightly better returns in its DVD afterlife where taste has no bounds.

As the story goes, Dr. Ted Grey ( Heroes star Milo Ventimiglia) arrives at a Washington, D.C., morgue with the reputation of being the young Mozart of the autopsy. He exhibits a brilliant mind in analyzing cause of death. As the other, less talented residents cautiously circle him, he is eventually inducted by their self-appointed, truly pathological ringleader Jake Gallo (Michael Weston, in full sicko mode) into the sadistic ritual of committing so-called “perfect murders” on unsuspecting victims. By using their medical knowledge, they are able to target someone they believe deserves to die and commit a crime that simply can’t be solved. As their extracurricular activities expand, the young doc gets high on meth and hooked on kinky sexual encounters next to the decaying, carved-up bodies. To say this new dark side poses problems with his sweet fiancée (Alyssa Milano) is an understatement, especially as one of the female residents (Lauren Lee Smith) develops a fatal attraction to Dr. Grey’s, uh, anatomy, after their smoldering late-night sexcapades among the dead. Of course, any Screenwriting 101 course dictates major trouble will lie ahead when psycho Jake gets jealous and starts spinning out of control.

Although the basic premise is an ingenious idea for a good a horror movie, this isn’t a good horror movie, largely because there’s absolutely no credible reason to believe a doctor as smart and dedicated as Grey could suddenly get so swept up into these kinds of seamy, sleazy goings-on. There is nothing in his character to suggest an un-caged psychosis, yet there he is, carving away with the rest of these losers. Most disturbingly, the graphic images of bodies being sliced and diced and organs strewn about like peanut shells is so intensely disturbing and gruesome, the film’s marketers should pull out an old promotion idea of ’50s schlock-shock film producer William Castle and put a nurse on duty in the lobby. But, then again, judging from the early grosses, she would probably be the only one in the theatre.