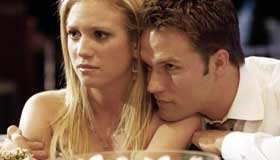 A stalker slices up a group of graduating seniors in a slasher flick that rates a solid C. Nelson McCormick’s painlessly forgettable thriller might pack teens in the theaters, but they won't remember a minute of it by their own prom night.

Prom Night is the high point of your life? Only if you get axed before the buzz wears off. Three years after her family was hacked to bits after filing a restraining order against her psycho teacher Mr. Fenton (Jonathan Schaech, hiding his Elvis-hotness with a scraggly beard), Donna (Brittany Snow) is trying to move on with her life. All that's between her and graduation is the big dance. She's got her champagne dress, her bleached blowout, and the longest limousine in Bridgeport, Connecticut. What she's missing is advance notice that three days ago, Fenton broke out of the psych ward and is headed her way.

Donna isn't the teen slasher genre's typical androgynous heroine; the blonde, tan and baby-faced Snow is more Reese Witherspoon than Jamie Lee Curtis (star of the unrelated 1980 Prom Night.) She's sweet and dull with little more to say than "I'm having a great time!", though she boasts an inexplicable full scholarship to Brown. Paradoxically, the only reason we care at all about her survival is precisely that Nelson McCormick makes her and her friends so average. Lacking the Grand Guignol pranks and savagery of Carrie, nothing distinguishes these kids from those on an episode of Laguna Beach. Donna and BFFs Lisa (Dana Davis) and Claire (Jessica Stroop) get their hair done, chatter about inanities like "OMG what's she wearing?" and squeal over their boyfriends Bobby (Scott Porter), Ronnie (Collins Pennie), and Mike (Kelly Blatz), respectively. (If screenwriter J.S. Cardone had added a Richie and Ralph, he'd have the lineup of New Edition.) When they hug, we hear emo hits. When they pout, we hear emo hits. They're "real teenagers," in the 21st century version of the word. And we care. Kind of. Well, mainly for Davis' Lisa, a loyal and steely prom queen hopeful. I always feel sorry for the target's friends — no matter how callous or peripheral — axed simply because they're there.

But after Bobby pretends to be the first date ever to feign getting stabbed by the corsage, it's off to the dance at the ritzy hotel where they've booked a suite upstairs. Donna's guardian aunt and uncle (Jessalyn Gilsig and Linden Ashby) are more worried about pregnancy then death, that there'll be sexin' not stabbing, getting laid, not getting laid out, whacking off, not whacking (sorry, I'll stop now.) The slayings are fast and bloodless, either for a PG-13 rating or so when someone gets stabbed in hallway, Fenton doesn't need to worry about cleaning up before his next victim. (He's already knifed Maria the maid.) The time ticks by well enough with the usual jumps, though there's a long lag between the 2nd and 3rd act where everyone sits out the metaphorical dance of death by regrouping and relocating. McCormick delivers a message to prom-going teens: Don't drink or slip out of the dance to screw. Otherwise, the only thing to stay with you after the credits is whether the band Quietdrive meant to mess up the lyrics in their cover of The Zombies' "Time of the Season."