close
No Dazed and Confused 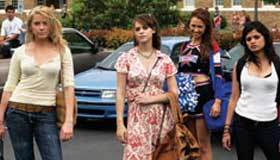 “That’s what I love about these high school girls, man,” Wooderson declared in Richard Linklater’s Dazed and Confused. “I get older, they stay the same age.” And so it is with Jess Manafort’s shamelessly retitled Remember the Daze —the concept of the last-night-of-high-school ensemble comedy/drama keeps getting older and older, it’s only the aspiring actors cast in it that stay the same age. This one was originally called The Beautiful Ordinary, and that third word too-effectively summed up the problem with it: No matter how attractive the actors are, there’s simply nothing special about it. Depending on who the breakout stars from the sprawling ensemble turn out to be (Wooderson was played, of course, a young guy named Matthew McConaughey), Remember the Daze may ultimately attain a bit of cult cache, but theatrical returns will likely be modest at best.

It’s impossible to predict the biggest breakout stars whose resumes will list Remember the Daze, of course, but the safest bets might be Melonie Diaz, Amber Heard and almost-all-grown-up Spy Kids alum Alexa Vega. All party like it’s 1999-literally—in this slightly soapy turn-of-the-millennium mishmash. Heard (of the perpetually pushed-back horror/thriller All the Boys Love Mandy Lane ) is the nominal leading lady here as Julia, a soon-to-be-senior who’s tired of her slacker/surfer boyfriend Pete (Douglas Smith) and thinks her BFF Stacey (Marnette Patterson) would be better off without her thuggish heartthrob Dylan (Khleo Thomas), too. Her solution? To try to make-out with Dylan on the last night of school, thus simultaneously giving herself and Stacey the excuses they need to break-up with their sub-par Romeos.

Diaz’s ( Be Kind Rewind ) subplot is marginally more original, as her Brianne is secretly exploring her lesbian leanings in a furtive relationship with fellow Julia sidekick Dawn (Lyndsy Fonseca). And Vega, playing younger than her 19 years as an about-to-be-freshman, has some nice exchanges with the surprisingly sensitive pseudo-player Eddie (a charismatic Shahine Ezell). Mostly, though, Remember the Daze is a set of largely plotless scenes showing teens trying to score either sex or drugs, with no particularly profound point to any of it.

Having a profound point, of course, is not a necessity in this subgenre, but—in the words of Wooderson—“it’d be a lot cooler if you did.”