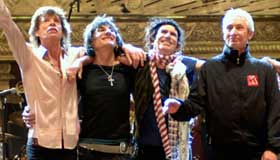 Putting together veteran rockers the Rolling Stones with the equally legendary director Martin Scorsese must have seemed an inspired match. And so the pairing turns out to be in Shine a Light, which manages to capture the raw energy of the band during two concerts at New York’s Beacon Theatre in October 2006.

Scorsese employed no fewer than 16 cameras and one Genesis Hi Def camera to shoot more than half a million feet of concert footage, under the watchful gaze of Oscar-winning cinematographer Robert Richardson. It was all edited down by David Tedeschi, who received an Emmy nomination for his work with Scorsese on the acclaimed Bob Dylan documentary No Direction Home. (Scorsese, of course, was also responsible for the awesome The Last Waltz.)

Here the aim was to get as close as possible to the energy of a live concert, and if it isn’t as good as actually being there then it comes pretty close. Scorsese’s camera team succeeded in capturing the moment without being over-intrusive as Mick Jagger, Keith Richards, Charlie Watts and Ronnie Wood leapt into action. It’s not just the onstage antics that fill the screen, often in grainy close-up, but also the behind-the-scenes glimpses of the preparations, including one revealing moment when Scorsese—who admits a lifelong inspiration from the Stones’ music—literally seems to be pulling his hair out.

Most of the humor is to be found in the archive interview footage with the youthful Stones demonstrating their early subversive influences. Not only do you get the bank, but there are also special guest performances from Christina Aguilera, Buddy Guy and Jack White of The White Stripes.

Scorsese was so energized by the experience that he is set to follow Shine a Light with another music documentary, this time on the life of the late reggae legend Bob Marley.